If you’re like most Quad City residents, you don’t think about our bridges (unless with no small amount of frustration when traffic clogs things up.) It’s hard to think about not having bridges today, but on this date, November 18, in 1935, a dedication was held for the new Iowa-Illinois Memorial bridge. 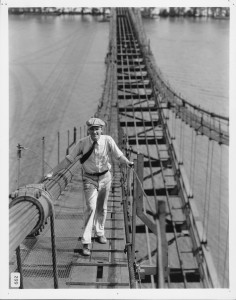 Gentleman stops for a quick picture of the construction. Photo taken from the UMVDIA website.

The bridge connected Bettendorf, IA and Moline, IL and was the result of many years’ planning and working. The bridge was built with PWA funds in the amount of $1.8 million dollars. 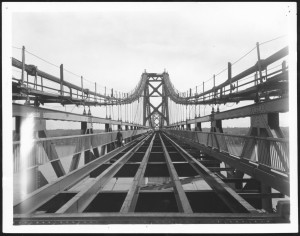 Photograph taken during the construction of the first span of the Iowa-Illinois Memorial Bridge. Photo taken from the UMVDIA website

As you can imagine, with the bridge connecting two cities in two states on opposite sides of the Mississippi River, the dedication was highly attended. In the true spirit of cooperation, Clyde L. Herring, Governor of Iowa, and Henry Horner, Governor of Illinois, held the ribbon taut in the center span of the bridge while Mrs. Joseph L. Hecht, wife of the Vice Chairman of the Davenport Bridge Commission, cut it and formally opened the bridge. 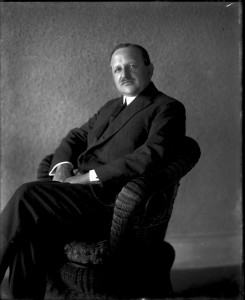 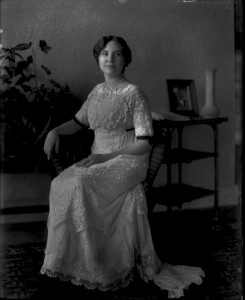 Both governors “…expressed the sentiment that the bridge stands as a most fitting and permanent memorial to the World War veterans in whose honor it was dedicated.” A shout went up as the crowds on both shores saw the ribbon flutter to the ground.

People were invited to walk the bridge and satisfy their curiosity, as vehicle traffic was not allowed until after the ceremony. From 4 pm to 11 pm vehicles were permitted to cross without paying a toll, but at 11 pm the regular fee schedule went into effect. (Did you know that the bridge used to be a toll bridge!?) Festivities continued beyond the ribbon cutting: parades through the business district by music groups and an American Legion banquet in which Ray Murphy, national commander of the American Legion and the representative for the veterans at the ribbon ceremony, was a guest speaker.

Like Loading...
This entry was posted in Local History and tagged Bridges, I-74 Bridge, Iowa-Illinois Memorial Bridge. Bookmark the permalink.

Bad Behavior has blocked 372 access attempts in the last 7 days.