In honor of Veterans Day we have chosen to post a few photographs from World War I that reside in the Richardson-Sloane Special Collections Center image collections. 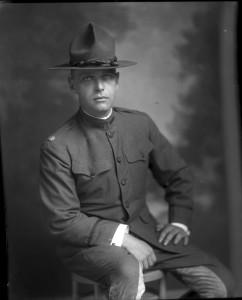 Our first photograph is of Major Arthur M. Compton. He was born in Davenport, and in 1913 married Gertrude Whitaker. During World War I, he was an instructor in field artillery at Ft. Sill, Oklahoma.  He was later promoted to colonel, being the youngest one in the Army. He later worked for the City of Davenport as an engineer before going on to the same job for the Levee Improvement Commission. (1)

Our second and third photographs are from the Rock Island Arsenal during World War I.

Local communities not only supplied soldiers for the cause, but also over 14,000 residents supported the war effort by working at the Rock Island Arsenal, producing weapons and equipment much needed in Europe.

Below is a wartime photograph of Shop I on the Rock Island Arsenal. The label reads: “showing a bunch of 75s’ ready for the assembler”.

75s’ most likely refers to the 75 mm Gun Carriages that were produced at the Arsenal during the war. 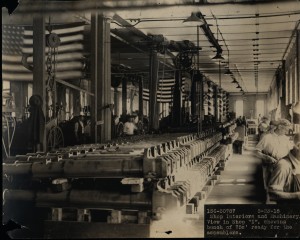 Our final photograph is of the largest piece of equipment produced on the Arsenal during the war. It was very heavy, weighing in at 40 tons. 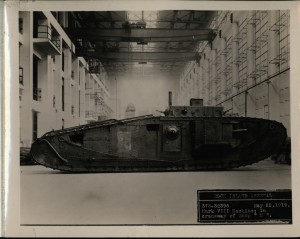 This photograph was taken in Shop M of the Rock Island Arsenal. It is of the Mark VIII Tank. The Arsenal received an order to produce 100 of the tanks in 1919. The tanks were widely used until the 1930’s, when more modern replacements came into the field. (2)

We would like to thank all veterans for their service to our country. You have our deepest gratitude.