William C. Cribbs was born in Monroe, Arkansas on October 11, 1927, the son of Opal (Hudson) and Booker Cribbs. He grew up Buffalo, Iowa, where his father worked for the Dewey Cement Company.

The family moved to Davenport in the 1940’s. Bill Cribbs graduated from Davenport High School in June 1945, where he played football, basketball, and track.  Mr. Cribbs spent one year at the University of Iowa before transferring to Iowa State Teachers College in Cedar Falls (now Northern Iowa University). During his time there he was a member of the Panthers football team.

While attending the Iowa State Teachers College he was drafted into the United States Army’s Transportation Corp. From there he was transferred into the Army’s Special Services to join their football team. This integrated unit not only had actors and singers, but also sports teams that played matches around the world. Mr. Cribbs returned to finish his courses at Iowa State Teachers College after his military service and graduated in 1949.

Back in Davenport in the 1950’s, Cribbs worked for the U.S. Post Office. He was the second African-American to be hired as a mail carrier in Davenport. He had hoped to work as a postal inspector, but was denied the opportunity to take the test. He left the Post Office in 1958 to become vice president of his father’s landscaping company, Cribbs, Inc., and later worked at Toney’s Barber Shop and as a barber inspector for the State of Iowa.

Cribbs joined the NAACP and was elected president of the Davenport Branch. He helped organize the march for Civil Rights on August 25, 1963. They pleaded with the Davenport Human Relations Commission to improve the housing situation for African-Americans in the city.

Bill Cribbs was the first Davenport Human Relations Commission director*, serving from September 1970 through June 1973. He left the Commission to move to Washington, D.C. and become the first African-American to work for an Iowa congressman: administrative aid to Rep. Edward Mezvinsky from 1973-1976.

Cribbs worked as the coordinator of affirmative action programs at John Deere Waterloo Works in the 1970’s and 1980’s, and served as the City of Davenport’s Affirmative Action officer from 1991-2000.

Bill Cribbs was part of a team of all-stars chosen from the Davenport Parks and Recreation Municipal League to play an exhibition game against Seniors from Iowa U. on March 23rd, 1949. 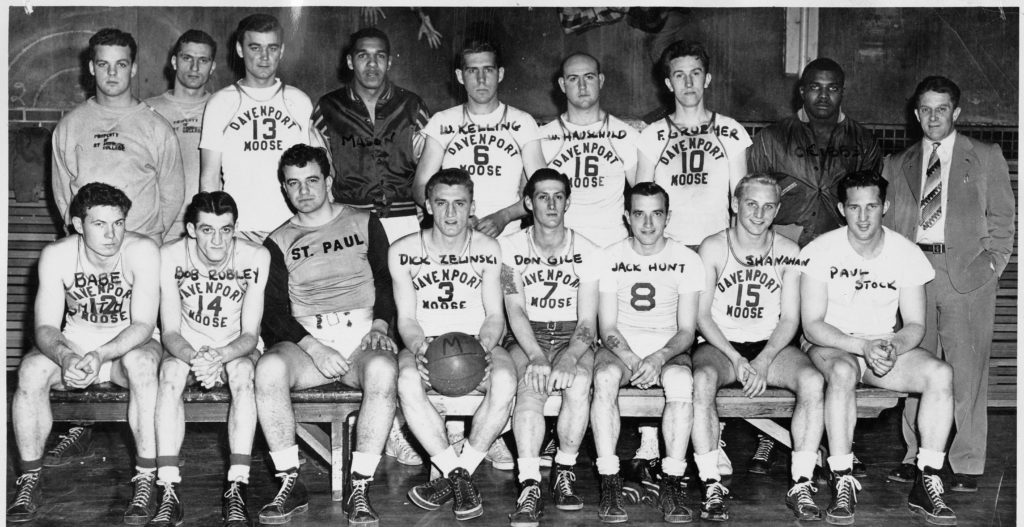