Charles William Toney was born in LaCrosse, Wisconsin on August 23rd, 1913 to Wilber and Stella Toney.

He attended Clinton High School in Clinton, Iowa, and was on the swim team.  This led to his first fight for Civil Rights when, at the age of 14, he was denied entry in Clinton’s new Municipal Pool . He went up to the City Attorney to ask him why he was being denied his rights as a resident, and was told that they didn’t want him swimming in the same pool as white girls.

Mr. Toney graduated in 1930, and studied Chemistry at St. Ambrose University in Davenport, Iowa, for a year, but the Great Depression made money tight and school was expensive.  He moved to Hell’s Half-Acre in St. Louis and found work as an elevator operator.

Mr. Toney moved back to Davenport in 1936, finding employment with John Deere Malleable Works. At the start of World War II, the company sent him for further training and he became the first welder of color in the states of Iowa and Illinois.  He worked as a welder for 20 years.

He married Ann Palmer on December 17, 1943 in Davenport.  They lived at 1010 Western Avenue, where they had an in-ground pool and invited black children in the community to use it to learn to swim, as they, too, were not allowed to use the Municipal Natatorium.

The summer before they were married, Charles and Ann stopped by a local soda fountain, The Colonial Fountain, after a movie date. They sat in a booth and then moved to the counter, but the waitress refused to serve them. Toney filed a complaint under Iowa’s 1884 Civil Rights Act Public Accommodation Law. On August 8th, 1945, a jury found Dorothy Baxter guilty of infringing on Toney’s Civil Rights. This was the first civil rights suit ever won in Iowa.  According to a survey by the League for Social Justice, called “Citizen 2nd Class,” The Colonial Fountain was the only restaurant to serve blacks in the early 1950s.

Mr. and Mrs. Toney published the Davenport Sepia Record, a local magazine spotlighting black people in the community and the country.   The goal of the magazine, which ran for two years, was to promote better racial conditions in the Quad Cities.

Mr. Toney also ran a barber/beauty shop on the SW corner of 11th and Ripley, one of the first Black businesses in Davenport.  At the time, it was the only barbershop in Davenport that would serve blacks.

“Some of us brought about a change from the segregation and discrimination that was practiced by the good old boys. People are soon forgotten for the good they did back in those days. What we did was not a popular thing to do.”

Mr. Toney didn’t limit his fight for Civil Rights to a local scale.  He served as president of the Davenport NAACP, president of the Catholic Inter-racial Council, served on the Iowa Civil Rights Commission, Chair of the Human Rights & Employment Practices Committee of the Iowa Association of Business & Industry, and others.   He also worked for a time as a Washington Lobbyist for a federal employment practices act under A. Phillip Randolph, the president of the Sleeping Car Porters Union.

He presented the Pacem In Terris Awardto Martin Luther King Jr., in 1965 in Davenport.

In 1964, Mr. Toney transferred to the main division of Deere & Company, and four years later, he was promoted to the Manager of Minority Relations. In 1972, he challenged Deere’s management with a request to compete for an executive position and became the first black executive with Deere & Co., serving as Director of Affirmative Action.

While Director, he initiated one of the first voluntary affirmative action plans in the nation, and oversaw corporate wide recruiting efforts at historically Black Colleges.

“As far as major corporations like Deere are concerned, we will continue to have affirmative action and equal opportunity because it’s morally right and doggone good business to use all the available talent a community has to offer.”

Mr. Toney received an Honorary Doctorate Degree for Public Service from St. Ambrose University in 1975 and retired from Deere & Co. in 1983, after 42 years of service.

His barbershop was recreated for a civil rights exhibit at the Putnam Museum in January 2010 and he was inducted into the Iowa African-American Hall of Fame in August of that year. Part of that exhibit is now on display at the Main Street Library through April 3rd. 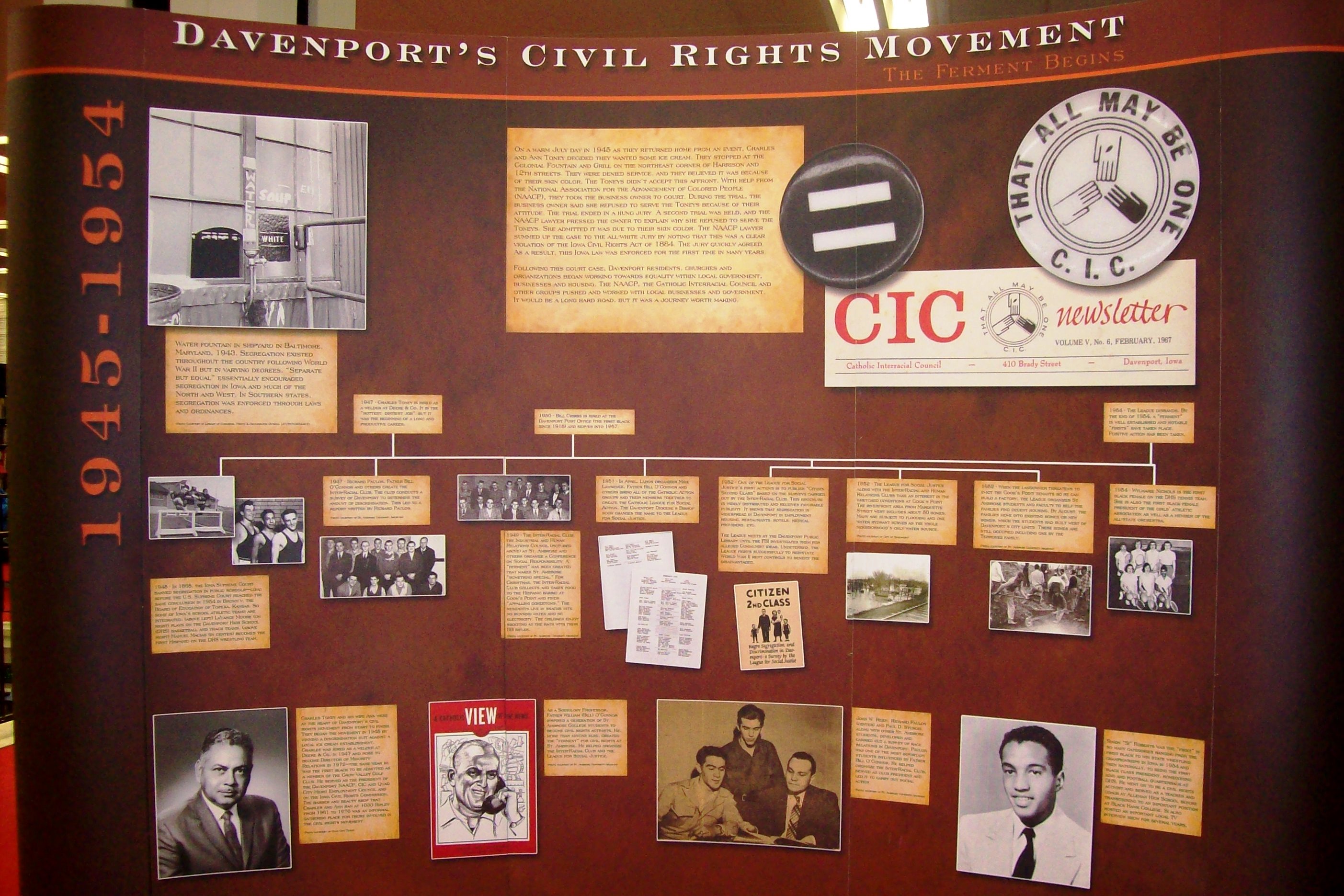 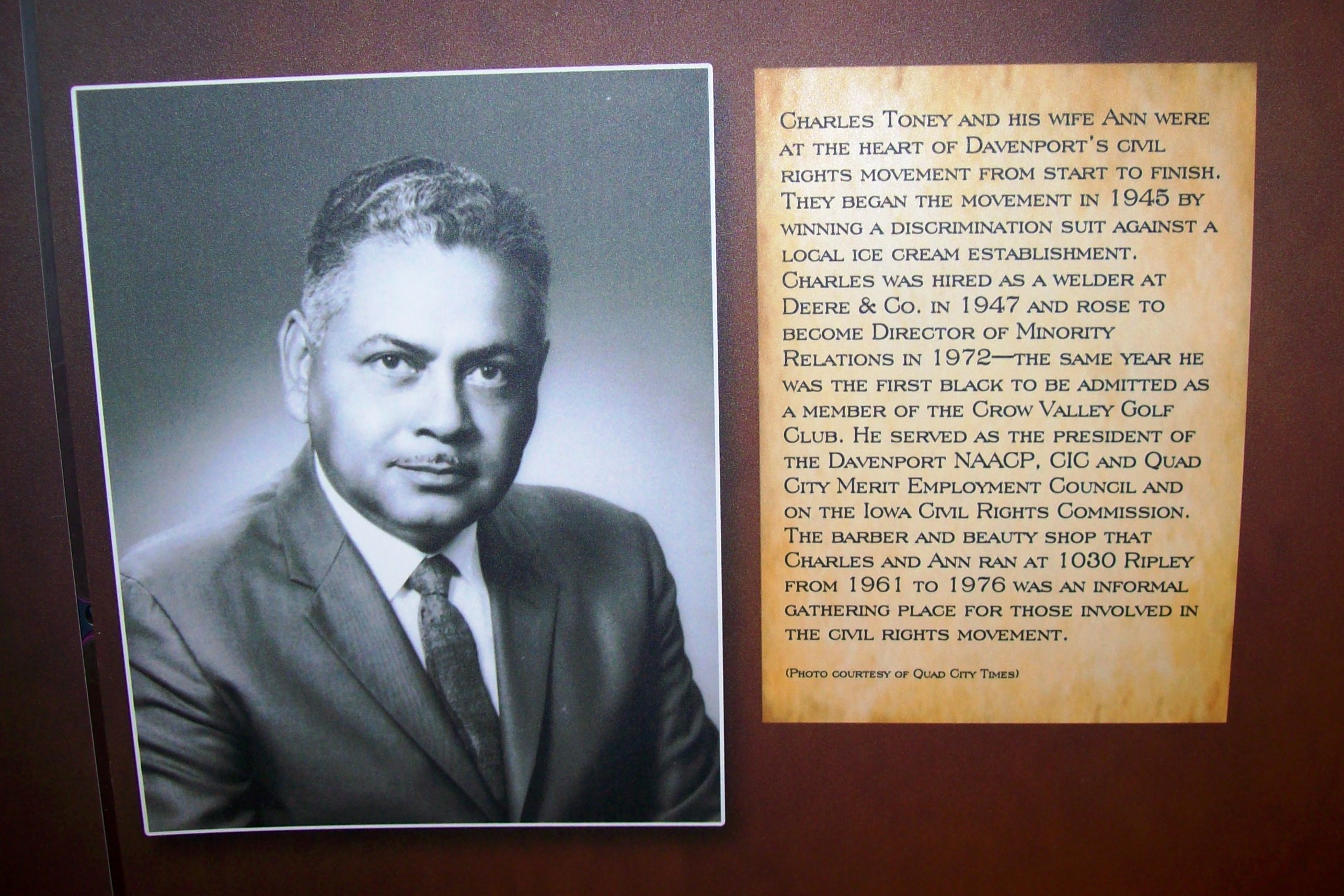 Smith, Robert Copeland. “Robert Copeland Smith: Q-C had its heroes in the fight for justice: Black history is a work in progress.” Quad-City Times 2 February 2000: p. 6A.

Bad Behavior has blocked 602 access attempts in the last 7 days.