It’s no secret that newspapers can be a wonderful resource for history and genealogy, but many early newspapers—ones from smaller communities or with shorter or less frequent publishing runs— have remained secrets, or at least inaccessible, to the average researcher.

The Library of Congress knows this, and launched their Chronicling America website to promote and provide access to various digitized historical newspapers—including those from Iowa.

Currently, issues from five Iowa newspapers are available online through Chronicling America, including issues from 1894 to 1922 of The Iowa State Bystander (later, simply The Bystander), a newspaper established by the African-American community in Iowa.

This is very exciting news for us—pun intended!—as The Bystander  often included articles from Davenport’s local African-American community, which was all too frequently ignored or given short shrift by our local newspapers. 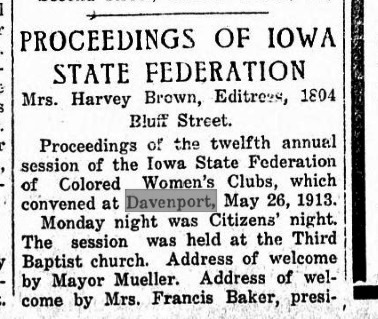 Personal news items as well as articles illustrating the struggles for equality and Civil Rights in Iowa and throughout the country can be viewed online at Chronicling America.

Go check it out!

Bad Behavior has blocked 683 access attempts in the last 7 days.