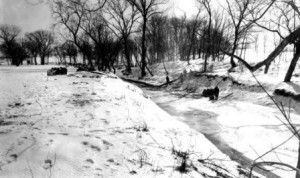 We decided to blog this week about the weather because after a winter of freezing cold and permanent snow . . .  it’s still cold and still snowing.

And while that makes us a little sad, we thought it was a wonderful excuse to review weather stats to see how the winter of 2013-2014 compares to years past.

It turns out it’s doing very well, with several records broken. The National Weather Service identifies winter as running from December 1 to February 28. During that time, cold and snow dominated our weather forecast.

December of 2013 didn’t break any records with its mean temperature of 20.5 degrees Fahrenheit and 13.8 inches of snow, as recorded in Moline, Illinois.* December of 2000 still holds the records for coldest (13.1°F) and snowiest (32 inches).

January of 2014 faced a challenge, as in that month many low daily temperature and snow records were set in the Blizzard of 1979. It seems that January of 1979 still stands as the coldest (6.3°F) and snowiest (26.7 inches) recorded. January of 2014 gave it a good try but only produced a mean average of 14.8°F and 17.7 inches of snow. No records broken there!

These chilly temperatures helped February of 2014 tie for the 5th spot in the Top Ten Coldest Februarys. The mean temperature in Moline was 14.6°F, which is shared by February of 1905.

As we move into March the official records for the winter (December, January, February) can be studied. How did the winter of 2013-2014 fair in light of some stiff (and cold) competition?

However, 2013-2014 took over the Snowiest Winter category, with 53.8 inches, which is the official total recorded (today’s delightful snowfall will fall under Spring record keeping from March 1st – May 31st). Stunningly, the winter of 1978-1979 fell to second with 52.9 inches,** though as some of us recall, about half of that fell within a forty-eight hour period.

Now we focus on Spring with the start of March. Is it coming in like a lion or a lamb?

We certainly hope the old weather lore of March coming in like a lion or lamb and leaving the opposite way holds true.

*While records are also maintained in Davenport, IA, official record keeping in this city did not begin until the 1980s. Record keeping began in Moline, IL in 1872.

Bad Behavior has blocked 845 access attempts in the last 7 days.