The St. Elizabeth’s Tragedy: Part I of II

In the early morning hours of January 7, 1950, as frigid winter temperatures were made harsher by a strong wind, Mercy Hospital night orderly Murray Francis noted an eerie light glowing outside. Shortly after 2:00 a.m., he activated an alarm.

St. Elizabeth’s was on fire. 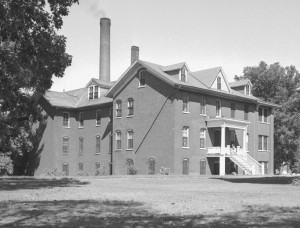 St. Elizabeth’s during the summer of 1949. The chimneys in the rear of the photo were part of the separate laundry building.
Photo courtesy of The Quad City Times.

Both buildings were four story structures. The basement was at ground level with an elevated main floor that was reached by walking up a flight of outdoor stairs to a lobby. Once inside the lobby there were interior doors that were kept locked at all times for patient security.

By 1950, the main floor housed parlors along with rooms for “acute” patients. These patients were staying in the hospital on a voluntarily bases for psychiatric needs or were post-surgical cases. The second and third floors (which when looking at the building from the outside would appear to be the third and fourth floors) housed long-term committed patients. The top floor was actually a converted attic with only one stairway to access it.

The interior of the 75 year old building had recently been freshened up during the summer of 1949 with new paint, new electrical wiring, and other updates. However, installation of a fire sprinkler system had been delayed due to finances.

The outside of the building looked similar to its earlier days. One physical change over the years had been the removal of two large chimneys that were taken down when a new heating system was installed. While the chimneys were removed from the exterior of the building, the interior chimney flues remained uncapped in the converted attic, which would prove to be a dangerous mistake, later.

For patient safety, bars had been installed on the windows of the upper three stories. The bars could only be unlocked from the outside. The nuns, nurses, and local fireman carried keys to unlock the bars in case of emergency.

St. Elizabeth’s was a self-contained unit that allowed patients to move about freely between their in-house therapy appointments.  For the most part, doors to the patient rooms were not locked at night except when needed for patient safety.

Patients were even allowed to smoke in their rooms or the parlors. The night nurse gathered the cigarettes and matches during final rounds and locked them away until the next day.

According to the book, From Simplicity to Elegance: The Story of Mercy Hospital, Davenport 1869-1994 by Sister Mary Brigid Condon (SC 362.11 Con) on the night of January 6, 1950, there were 63 patients in St. Elizabeth’s under the care of RN night supervisor Anna Neal. No other staff was on duty, though Miss Josephine O’Toole, an off-duty live-in nursing aide, was sleeping in her room on the second floor of the building. If there were any problems Mrs. Neal was to awaken Miss O’Toole for help.

But later, during the Scott County Coroner’s Jury Inquest,* Miss O’Toole testified that she was not awakened by Mrs. Neal on the morning of January 7th , but by the sounds of screams coming from elsewhere in the building,  shortly after 2:00 am.  As she left her room, she reported, the hallway was already filling with smoke. 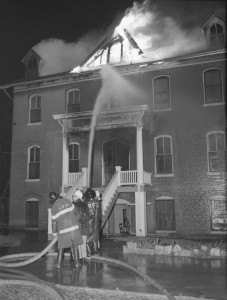 Second Assistant Fire Chief Harry Lange reported to the Corner’s Jury Inquest that the first alarm call came into Central Fire Station at 2:06 a.m. Fireman Philip Axelrod stated to the Inquest he was part of Fire Engine Company 6, the first truck to arrive on scene a few minutes after the call came in.

Fireman Axelrod noted flames were shooting out of a window on the main floor just north of the fire escape on the east side of the building when his truck arrived. The flames were already reaching up to the roof from the outside. Two more fire engines arrived along with a ladder truck to the first alarm.

It was immediately apparent that extra resources were needed and a second alarm was called for additional trucks. That brought three more engines and another ladder truck to the scene. Soon a third and fourth alarm were called as the fire quickly spread throughout the building. Not only were fire fighters trying to rescue patients inside and put out the St. Elizabeth fire, but the surrounding buildings also needed protection from the flames. The two buildings in closest proximity to the fire were the hospital laundry and the convent.

Soon over one hundred fire fighters from all over the area were battling to not only put out the fire, but save the 63 patients trapped behind the iron bars and locked doors that prevented their escape as flames swept through the building.