The Beginning of Mercy

On December 7, 1869 the first patient entered the new Mercy Hospital situated on the outskirts of Davenport. Started by the Order of the Sisters of Mercy , the hospital and its grounds would play a pivotal role in the physical and mental health of the local community.

However lovely the grounds, the effort to transport their children to the edge of the city and back seems to have been a deterrent to parents. By 1861 the Sisters of Charity moved the school to a more central location on Brady Street, where the school flourished. 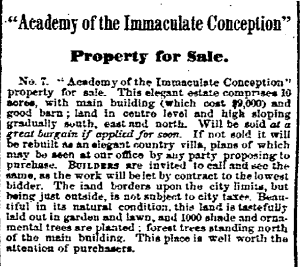 It wasn’t until 1869 that the property was given to the Sisters of Mercy to start a hospital.  Ten additional acres were donated by a neighbor and the Scott County Board also provided a loan of $2,000 to remodel and make necessary improvements to the building.

The December 7, 1869 Davenport Daily Gazette described the large brick building and the twenty acre grounds. The Sisters had also created a medical board of local physicians and surgeons to staff the hospital.

Patients were either private, paying for their own rooms, or county patients, who were cared for in a dormitory environment. It was noted in the December 7th article that private and county patients were to be kept separate, but provided equal care. It was estimated 200 patients could be cared for at one time.

At the time, Mercy Hospital was unique. Not only were  patients treated for physical ailments, but the building housed psychiatric patients as well. Later, two dedicated psychiatric buildings would be added to the growing Mercy Hospital complex: St. Joseph’s for men and St. Elizabeth’s for women. 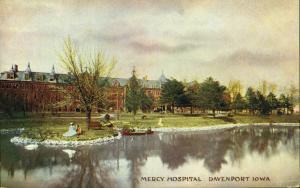 145 years later, the land  on which Mercy Hospital began is surrounded by local neighborhoods and schools and it is difficult to imagine it as twenty acres of trees and gardens.

Yet the hospital continues to be a place of healing—a fine legacy for the Sisters who offered Mercy to those in need.

Bad Behavior has blocked 898 access attempts in the last 7 days.