During the cold dark morning hours of January 7, 1950, St. Elizabeth’s, part of the Mercy Hospital Complex, had caught fire, placing 63 patients and 2 staff members in danger.*

Before fire fighters and police arrived, several people from the complex attempted to rescue patients from the burning building. They’d been stopped by the interior locked doors on the main floor as they tried to enter through the lobby.

Patients were seen in the windows trying to escape, but they, and their rescuers, were hampered by security bars. Several witnesses ran to Mercy Hospital’s maintenance room in hopes of getting a blow torch or saws to use on the bars. That room was locked and they were unable to gain entrance to the tools.

As firemen and police arrived they used their keys to attempt to open the window bars from the outside. Others went into the building through the basement doors and tried to go up that stairwell as the main lobby area was filled with smoke and fire.

In the middle of the building, a dumb waiter ran from the basement to the third floor. Rescuers who attempted to enter the basement reported to the Corner’s Jury Inquest that flames had been coming out of the dumb waiter, quickly preventing them from reaching the far side of the room to access the stairs to the upper floors in a rescue attempt.

The wind also hampered firefighting efforts that night. A strong wind blew smoke around the building making it hard to see patients in the windows. It also caused the fire to spread more quickly. 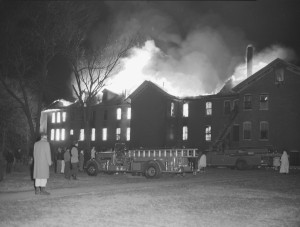 Within twenty minutes of the arrival of the first fire truck, the blaze was out of control. Forty minutes after the first alarm, the entire structure was on fire. It took about two and a half hours for the fire to be put out. No other building on the property was lost.

The heavy loss of life came as no surprise: Forty patients and the night supervisor, Mrs. Anna Neal, died.  Mrs. Neal was found by firemen in a patient’s room on an upper floor. It appeared to the firemen that she had gone to help the other patients, but lost her own life in the process.

Davenport Police and Fire Departments and Iowa state investigators immediately began to search out the source of the fire and the reasons it had spread so quickly.

Hospital rumors began circulating that a female patient at St. Elizabeth’s claimed she had started the fire. The woman, who had been diagnosed with paranoid schizophrenia, had voluntarily entered St. Elizabeth’s as a patient on December 12, 1949 and was set to be released January 7th of 1950.

Later, her comments were reported at the Coroner’s Inquest.

In the early morning hours of January 7, 1950, the twenty-two year old female patient was in her room on the main floor of the building. In her possession was her husband’s silver lighter, inscribed with his initials; it had been missed during the routine bedtime search for cigarettes and matches.

On most nights her room had remained unlocked. Things changed that evening with the latching of her door: the evening nurse reported she had to secure the room during the bedtime check, as the woman kept leaving her room to go into other patients’ rooms.  The nurse was alone on duty and worried about the patient’s safety if she roamed while the nurse was caring for the patients on the upper floors. The evening nurse went off duty at 11:30 p.m. and was not involved in the fire.

The patient stated that she had looked out of her window and had seen her husband being held against his will in the building across the way (her husband was actually at home and not near the hospital). She tried to get his attention, but could not. She also could not leave her room as the door had been latched, which added to her fears.

At about 2:00 a.m., the patient used the lighter to light a newspaper on fire. She waved it in front of the window to attract help for her husband’s imagined plight. As she did so, her curtains caught fire.  She opened the window, inadvertently fanning the flames, and then went to her door and began to pound and call for help.

When Mrs. Neal opened the door, the patient first ran to another patient’s room to tell her to get out, then ran to the parlors near the lobby. The parlor door leading to the lobby was locked. The patient stated that she dropped the lighter and broke a glass door pane. She reached through the broken glass and opened the door from the other side, cutting her hand in the process.

She exited the building and was found walking outside. The patient was taken to the ER for stitches and began telling the staff that she had started the fire.

As the investigators continued to search for answers, they found evidence to support her story: a silver lighter with initials engraved on the bottom that matched the patient’s husband’s initials was located in the parlor area, not far from a door with a broken pane of glass and blood on a piece of glass and door jam.

Several witnesses stated the fire was first spotted coming from a window on the main floor just north of the fire escape on the east side of the building. The room belonged to the patient in question.

The Corner’s Jury Inquest led to the calling of a Grand Jury to determined whether the patient would be criminally charged with the deaths of forty-one persons.

The Grand Jury convened in the beginning of February 1950. Their findings matched those of the Corner’s Jury Inquest. The patient**, who had been transferred to Mt. Pleasant State Hospital, had been declared insane by doctors.  Due to the declaration of insanity, a trial was not pursued. She was later transferred to the mental hospital in East Moline, Illinois as she was an Illinois resident. In June 1950, the patient was released from the facility after doctors felt she had made improvements in her mental health.

The tragedy of the St. Elizabeth’s fire brought into focus the dangers of older public structures. The interior of the building was wood lathe and plaster construction with wood wainscoting in the rooms—all extremely flammable. The space between the plaster and exterior wall allowed the flames to travel quickly up to the attic area. It is believed that the open window allowed wind and air into the room that fed the fire. The door to the patient’s room was also likely left open which accounted for the flames traveling so quickly into the hallway.

By chance, the room in which the fire started also had an opening for the dumb waiter. The fire traveled quickly through the shaft, spreading in both directions to the upper floors and the basement.

Other factors that allowed for the spread of the fire included the uncapped chimney flues, which allowed flames easy access to the upper floors, while the fire fed off fresh paint and varnish which had been applied only a few months before.

The converted attic only had one stairway, narrowing the path of escape. The locked bars on the windows prevented those on the lower levels from leaving as well.

In addition, the decision had been made to delay the installation of a sprinkler system, for financial reasons. 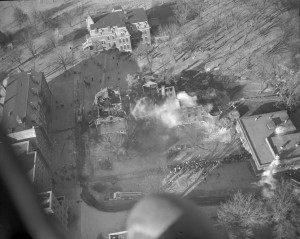 After the fire. January 7, 1950. Photo courtesy of The Quad City Times.

St. Elizabeth’s was never rebuilt. By 1955, Mercy Hospital decided that it would no longer provide long-term psychiatric care; St. John’s, St. Elizabeth’s counterpart for male patients was torn down.

As for the deceased, sixteen bodies remained unclaimed after the fire. Some were too badly burned to identify and others had no family. These women were buried in Sacred Heart Cemetery on the Mercy Hospital grounds, alongside the Sisters of Mercy who had passed before them.

St. Elizabeth’s fire remains one of the greatest tragedies in Iowa history.

*The information in this post was obtained through the interviews conducted for the St. Elizabeth Hospital Fire Inquest – Microfilm 977.769 Cor.

2 Responses to The St. Elizabeth’s Tragedy: Part II of II