Still Doing His Rounds: The Haunting of 723 Main Street

Join us tonight at 7pm at the Fairmount Street Branch Library for a spooky talk from Terry Fisk, author of The Iowa Road Guide to Haunted Locations. 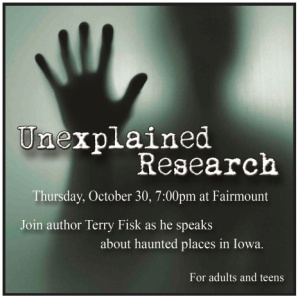 Mr. Fisk’s book includes two entries for Davenport.  One is on the “Banshee of Brady Street”, an urban legend which we debunked in a previous post.

But there’s another Davenport haunting that our research can’t dismiss so easily.

In May of 1972, another occult writer, Brad Steiger, visited Palmer College’s Pi Kappa Chi fraternity house at 723 Main Street in Davenport.  With him was Irene Hughes, a well-known medium from Chicago.

They were there to investigate reports that the residents had heard footsteps, typing sounds, and other unexplained phenomena.

After a few minutes talking with the residents, the medium mentioned that she saw a spirit that looked like a doctor wearing surgical clothes.

According to our research, the property on which the home sits was once owned by St. Luke’s Hospital and it is located near their first hospital building.

The residence itself had been the home of Dr. William A. Stoecks who had been associated with the firm of Hageboeck, Stoecks, Maxwell, Kornder & Boss.

Dr. Stoecks died on October 18, 1961 at Mercy Hospital in Davenport and is buried at Oakdale Cemetery.

But if Ms. Hughes is to be believed, he was still doing his rounds at least a decade later.

Bad Behavior has blocked 609 access attempts in the last 7 days.