The Mystery of the Orphans’ Monument 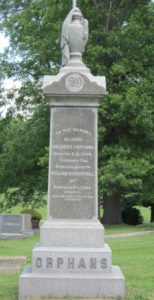 Standing like a sentinel over the headstones in the Orphans’ Section in Oakdale Memorial Gardens Cemetery is a large granite monument, surrounded by mystery.

Starting in November of 1865, Orphans from the Iowa Soldiers’ Orphans Home (later renamed the Annie Wittenmyer Home) were originally buried in Section 6* at Oakdale Cemetery.

In 1883, the Oakdale Cemetery board donated an area near Section 15 for a new resting place for the orphans.** On October 3, 1883, the Davenport Weekly Gazette reported that fifty-three orphans were being removed to their new burial section.

By February 1884, the Davenport Daily Gazette and the Davenport Weekly Gazette were reporting that the Board of Trustees at the Soldiers’ Orphans Home had decided a large monument was needed for the Orphans’ Section at Oakdale.

Fortunately, they had $600 from a bequest to be used as needed and the money was used to purchase the large monument that stands today near the orphans’ graves. The  monument was installed on May 1, 1884.

Inscribed on the face of the monument are the words “To The Memory of Iowa Soldiers Orphans. Erected A.D. 1884. Through the Benevolence of William D. Berryhill of Ringold [sic.]*** Co. Iowa. Their Fathers Fought For The Union.”

And who was William D. Berryhill of Ringgold County, Iowa?

The answer is simple. We don’t know.

Even the facts about Mr. Berryhill supplied in the newspaper accounts don’t match. The Davenport Daily Gazette article from February 13, 1884 indicates the $600 was a donation from a man from Ringgold County who had sold 40 acres of land to be used as the trustees would prefer.

But the Davenport Weekly Gazette on February 27, 1884 lists the monument being paid for by a gift received through the will of a deceased former resident of Ringgold County.

While the February 13th article sounds like the bequest of a living individual, the February 27th request clearly indicates it is part of a deceased individual’s will.

A US General Land Office Records search on Ancestry.com for Ringgold County, Iowa comes up empty for a William D. Berryhill owning land there.

A Census search on Ancestry.com finds a William D. Berryhill lived in Louisa and Johnson Counties in Iowa, but not Ringgold. This Berryhill was born in 1824 Pennsylvania, but did not die until March 1907 in Louisa Co. His obituary indicates he owned land throughout Iowa.

If the February 13th article is correct with a living donor it could be this William D. Berryhill, but if the February 27th story is true, it certainly would not be him.

Sadly, at this time, we have no confirmed information about who Mr. Berryhill was or why he would single out the Orphans Home for a bequest.

If you know the answer to this mystery, please let us know!

In the meantime, and in honor of Memorial Day,  we continue to remember those who fought for our country and their families who fought their own struggles on the home front, as memorialized in the final line on the Orphan’s Monument:

“Their Fathers Fought For the Union”

*We would like to thank Deb Williams at Oakdale Memorial Gardens for her help in providing information on the Orphans original section.

**Section 6 was located where the Hill Mausoleum is today. Not far from the Beiderbecke family lot.

***The county is correctly spelled “Ringgold”. As the newspapers of the time also spelled it “Ringgold”, we can only guess a mistake was made by the monument carver.