A New (Old) Look at the Iowa Soldiers’ Orphans’ Home

For many of us, when the name Iowa Soldiers’ Orphans’ Home or Annie Wittenmyer Home is mentioned we think of the beautiful two-story red brick cottages that exist today on the site. 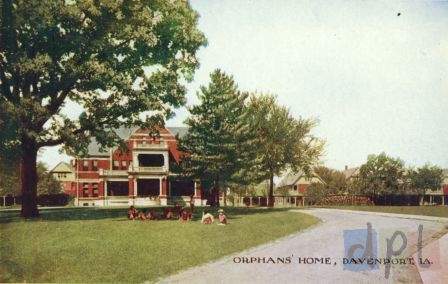 These were not the original buildings that the orphans arrived to in November 1865. The site had been home to Camp Roberts, later renamed Camp Kinsman, for Calvary units during the Civil War. Left behind after the war, the military barracks, hospital, kitchen, and miscellaneous buildings had been roughly updated for the needs of the children.

According to the Davenport Daily Gazette on November 16, 1865

“On the north side of the square is a row of six-one-storied houses each of which is divided into three departments: 32×20 for a sleeping room to accommodate about 30 children, 22×16 for a sitting and study room, 10×12 for the teacher’s room.” (Pg. 4)

As indicated, every cottage had one adult living with the children. Meals were taken in a large separate dining room, and the hospital reopened for sick children. Other buildings were also modified for the needs of the orphanage.

Until recently we had to use our imaginations to picture what the original Soldiers’ Home buildings looked like. We are excited that two stereoview cards dating from the late 1860s are now part of the Richardson-Sloane Special Collections Center.

The images were taken and published by John G. Evans of Muscatine, Iowa and published as part of his Evans’ Western Views collection.

May we present Image 135 from the Evans’ collection. Labeled View at the Orphans’ Home, Davenport, Iowa.

Bad Behavior has blocked 764 access attempts in the last 7 days.