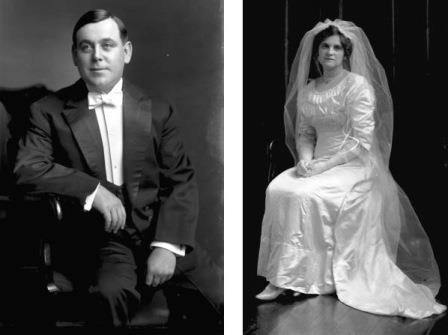 On January 10, 1912, Blanche Elizabeth Boggess married Frank Edwin Gorman in a ceremony at the Rock Island home of her parents, 926 Seventeenth Street.

Miss Boggess was an active member in the social circles of Rock Island, Illinois, while Mr. Gorman was a young Davenport businessman who co-owned the Gorman Bros. cigar company and Gorman & Sons, a successful printing business.

The Davenport Democrat allotted almost eight column inches to the event the following day, and included a detailed description of the bride’s wedding finery.  No photographs accompanied the article—that wasn’t often done in 1912.

Luckily, the couple had their photographs taken by the Hostetler Studios in Davenport: 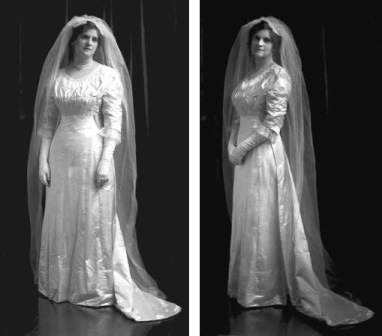 “The bride’s dress was of ivory white satin, made entrain, and trimmed with point lace.  Her long veil was held in place with Orange blossoms, and she also wore a bando and collar of pearls, while her flowers were lilies of the valley in a round bouquet.” 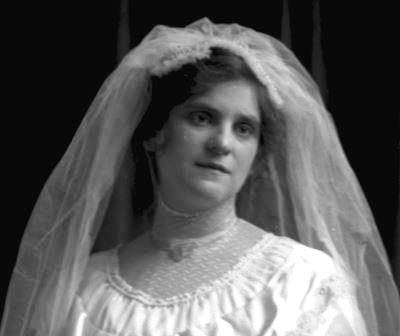 Detail of the pearl bando and collar.

The flowers mentioned in the article are omitted from the photographs, which seems to indicate that they were not taken the day of the wedding.  In fact, as the bride and groom were not photographed together and their glass negatives were filed under different numbers, it may be possible that they visited the Hostetler Studios separately before the day of the ceremony, so the groom wouldn’t see the bride’s dress before the ceremony.

The Hostetler Studio does not appear to have taken any photographs taken of the rest of the bridal party—or not under the names of the bride or groom at least—but the Democrat offers a lovely description:

“The maid of honor [the bride’s cousin, Miss Helen Krell, of Rock Island] was dressed in pink chiffon cloth over pink satin, and she carried pink Killarney roses . . . the bridesmaids [The bride’s cousin Miss Lillian Boggess of San Francisco and Miss Ella Baumback of Rock Island] were in pink chiffon cloth over white satin and their flowers were arm bouquets of the pink roses, while the little ring bearer [the groom’s niece, Miss Rosemary Gorman], who carried the wedding ring in the heart of a rose, was all in white.”

The newspaper didn’t appear to care what the groom wore—traditionally, no one did except perhaps for the bride and her mother—but as the Hostetler Studio shows us, he cut quite the dapper figure. 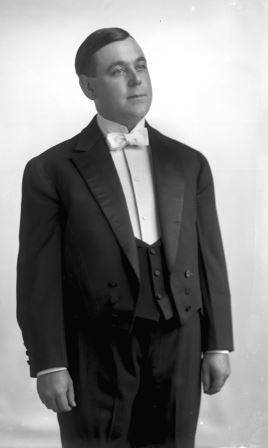 After the ceremony, a wedding supper was enjoyed by 125 guests, after which the bride and groom went on an extended wedding trip, intending to return and set up household in Walsh Flats on West 4th Street in Davenport—a very fashionable address for the newly wed.

Bad Behavior has blocked 1115 access attempts in the last 7 days.