The Davenport Fire Department: twenty-six years in the making

Whereas, the events of the past week have made it very manifest that a more expeditious method should be adopted of procuring water to extinguish fires than by hauling it in Casks on drays from the river;

Therefore be it resolved that a committee be appointed to enquire into the expediency of procuring a site for water works or reservoir to supply the future wants of this city.

Also the cost of such a site and the terms on which it can be procured.

The above resolution was made on the twentieth anniversary of the platting of Davenport.  The city had boomed in that time, and houses and businesses were not only farther away from the Mississippi River, they were closer together, presenting a greater fire hazard than before.

The “events of the past week” refers to a fire at a hostel some distance away from the river and up a steep hill.  According to the Davenport Gazette, one wagon spilled half its barrels before it reached the flames.  The brief article doesn’t mention the extent of the damages, but it was obvious Davenport had to rethink fire safety.

Whereas the city of Davenport is without a fire engine or other apparatus for the extinguishing of fires . . . and whereas it seems to be a general desire on the part of the citizens that such apparatus should be had by the city . . .  it is proposed that a special tax be levied . . . ”

The tax levy passed, but it wasn’t enough—the city was still paying off numerous debts, including costs related to the new Railroad Bridge.  The Aldermen held a public vote on July 28, 1856, to get approval for a loan.

On July 16, a terrible fire broke out in the Hull, Allen, and Company warehouse on Front Street near Rock Island Street (now River Drive near Pershing Street).  Three other buildings, a bakery, a two-story brick building, and a residence, were also destroyed.  The damage was estimated at $15,000 (almost $360,000 in 2010 dollars), which made it the worst fire the city had experienced so far.

The loan was approved.

That the Independent Fire Engine & Hose Co. be authorized to contract for two Fire Engines & Hose Carriages and Fifteen Hundred feet of Hose, with necessary Equipment . . . said contract subject to the approval of the Mayor

On October 3, 1856, the Davenport City Council passed an ordinance to establish a permanent city fire company.  The Independent Fire Engine & Hose Company was paid on a per fire basis.  But it was allowed to buy two pump-action fire engines and all the trimmings with city money.

The following May, the fire engines arrived.  They cost $3,400, but were able to throw a stream of water 200 feet from a 1.25 inch nozzle.  One was named “Pilot” and the other was called “Witch.”  These engines kept Davenport from burning down until the arrival of a newfangled steam-powered engine in 1866.

By that time, there were several Hose Companies keeping the city safe and it was difficult to keep track of who was fighting which fire.  In 1882, the state of Iowa passed a law allowing charter cities, like Davenport, with a population of 22,000 or above, to have a salaried fire department.  Davenport did not hesitate to take advantage of this new law and immediately established one, unified city fire department.

The rest, as they say, is history. 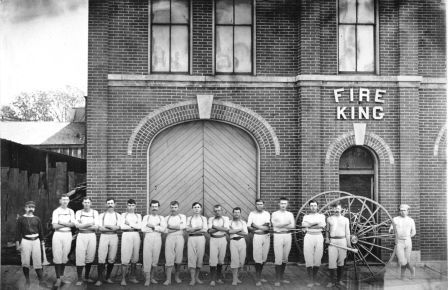 Bad Behavior has blocked 602 access attempts in the last 7 days.