Volume 1, Number 1 of the Daily Davenport Gazette* was published on Monday, October 16th, 1854. It was the first daily newspaper ever published in Davenport. The Gazette had been published weekly for the previous 13 years, and started out with about one hundred and fifty subscribers. Since 1849, Davenport had grown from “a hamlet of a few houses” to a population of over six thousand, and the people in the community were asking for a daily newspaper.

Davenport Gazette editor Alfred Sanders decided to give the people what they wanted and launched the Daily Gazette, although he wasn’t very optimistic about its chances for success. He had doubts whether the people of Davenport would be willing to pay extra for a daily newspaper, since they barely made enough money from subscriptions to cover the costs of publishing the weekly and Tri-weekly editions.

The subscription cost of the Daily Gazette would be six dollars per year paid in advance, or “twelve and a half cents per week” paid to the carrier. For advertisements, there would be an additional fee of twenty five cents per square, but they claimed that the size of a square (of 12 lines) had increased by twenty percent. 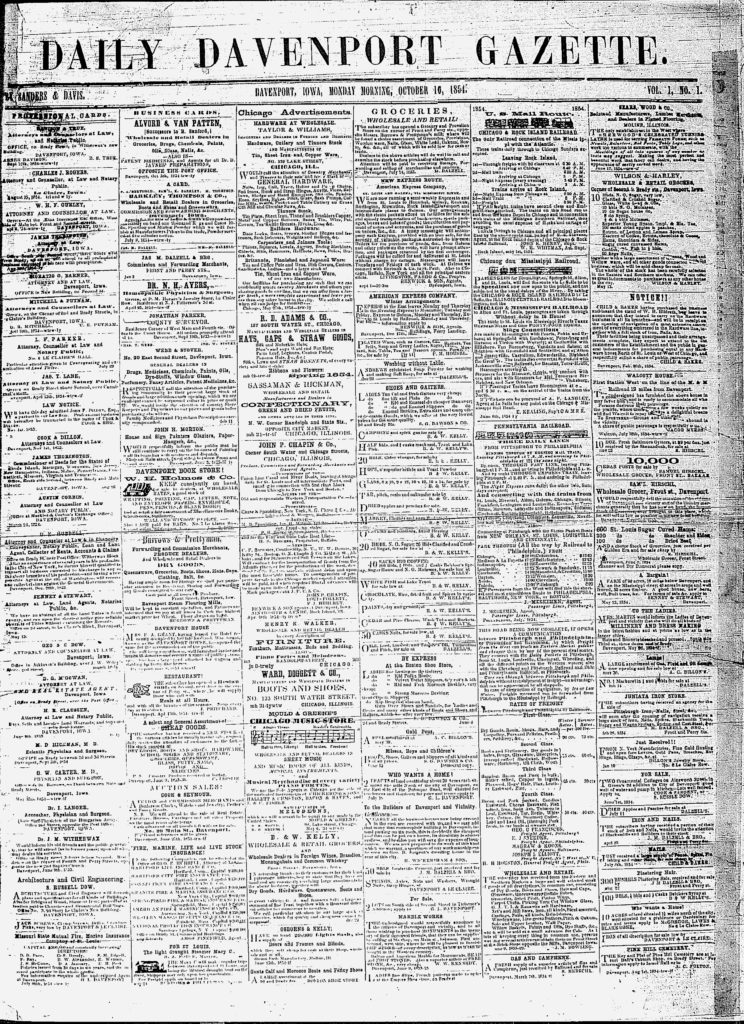 On that first issue, the front and back pages were entirely covered in advertisements and business cards for all kinds of goods and services. Mr. Sanders worried that they didn’t have enough subscribers to sustain a daily newspaper, so the ads were the only way to finance this new venture.

The second page had news stories from around the country, including election results from Ohio, Pennsylvania and Indiana. A marriage announcement for Mr. Samuel Hopkins of LeClaire and Miss Harriet Young of Pennsylvania was also published on page 2.

In local news, the first frost of the season occurred the previous Saturday, October 14. And Mr. Cressler of Prairie Spring Farm in Walnut Grove had sweet potatoes that measured over a foot in circumference and length, and could yield seven hundred bushels to the acre!

Fortunately for Mr. Sanders, the people of Davenport responded well to the new format, and The Daily Gazette became one of the primary newspapers in the region. It was published until 1887, when it was purchased by its rival, the Davenport Democrat.

Bad Behavior has blocked 739 access attempts in the last 7 days.