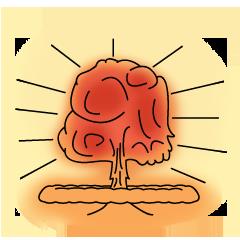 July 16, 2015 marks the 70th Anniversary of the Trinity Test. What’s the Trinity Test? This was the first successful test of the atom bomb at the Alamogordo Bombing and Gunnery Range in New Mexico. This site was flat and located relatively close to Los Alamos where the bombs were designed and produced. This section of land was given the code-name “Trinity” and thus July 16, 1945 was known as the Trinity Test. (Interesting fact: The Trinity Test Site is open twice a year for visitors, once in April and once in October. This is the article discussing this year’s visits. )

The Manhattan Project was a top-secret research and development project during World War II that produced the first nuclear weapons. President Roosevelt signed the order for the initial research committee in 1942 which eventually went through many iterations to become the core Manhattan Project group. Major General Leslie Groves was put in charge of the project from 1942 to 1946 and was the person who brought on Robert Oppenheimer, a physicist who was the director of the Los Alamos National Laboratory in New Mexico, the site that designed the actual bombs.

Secret facilities were popping up all over the country with the express purpose of manufacturing different parts of the bombs, for researching different aspects, and for trying out different methods. Everything was top-secret. Oppenheimer recruited the top scientists in their fields without being able to tell them what exactly they would be working on, except that it had a possibility of helping them end the war.

With so little information to go off of, many scientists packed up their families to move to Los Alamos, where they lived and worked in isolation, not even able to discuss their work within their own families. Everything was kept secret and compartmentalized.

This blog is just an introduction to the Trinity Test and the Manhattan Project. If the description above interested you, check out the resources below. 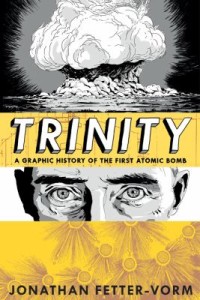 Trinity: A Graphic History of the First Atomic Bomb by Jonathan Fetter-Vorm gives a detailed history, not just on the Manhattan Project and the Trinity Test, but the very beginning of atom research, in laboratories of nineteenth-century Europe all the way to the Trinity Test.

This graphic novel goes into incredible detail about all the people involved in the history of the atom and its discovery. While most histories of the atomic bomb tend to focus on and use more scientific terms, Fetter-Vorm is able to include pictures and drawings through the graphic novel format that allow for a better conceptual understanding of a nuclear reaction and how atoms split. Readers are transported into the labs and lives of Major General Leslie Groves, Enrico Fermi, J. Robert Oppenheimer, and the other brilliant scientists who brought to life atomic bombs and ushered in a new era of warfare.

After the successful test of the atomic bomb, Fetter-Vorm then goes on to illustrate the decisions behind the dropping of the bombs on Nagasaki and Hiroshima. This graphic novel is an excellent depiction of what life was like for those directly and indirectly involved in the making of the first atomic bomb. 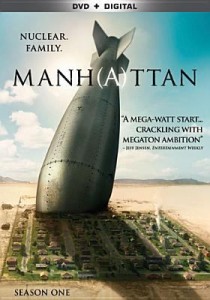 What initially reminded me of the Trinity Test’s anniversary was when I started watching season one of Manhattan. This television series follows the many scientists as they work to build the world’s first atomic bomb in Los Alamos, New Mexico and the struggles that their families go through moving to the middle of nowhere, being cut off from everyone outside the community, and being kept in the dark about what their family members are doing.

This show really hooked me because in addition to all the science and descriptions of the different models they were building, it also deals with the bureaucracy of this governmental entity, how they have to finagle getting supplies since where they are is only a P.O. Box and not an actual address, and how secrets and gossip run rampant through the entire community, fueling the suspicions that multiple people are spies and that others are committing treason. Tensions run high, both between the individual families and the two different science camps, each competing against the other to have the first successful atomic bomb design and then test.

Check out this television show to gain a better understanding of the complex secrecy of the Manhattan Project and how the segmentation of their lives, in addition to bringing immense tension, in the end allowed work to secretly flourish and bring together an explosive ending.