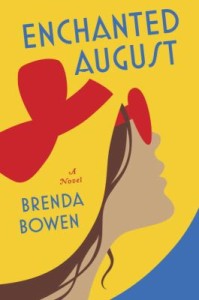 I was well into Enchanted August  before the (admittedly obvious) similarities to Enchanted April impinged upon my consciousness. In both,  several people who’d not be friends in normal circumstances find themselves sharing a vacation home in an idyllic vacation spot. They become better versions of themselves, more generous, open-hearted and kind. Marriages are improved, and friendships fostered.

Brenda Bowen’s novel is modeled on The Enchanted April by Elizabeth von Arnin. Published in 1922, it was made into a film in 1992, starring Miranda Richardson and Michael Kitchen.

In Bowen’s novel, Lottie and Rose happen upon an advertisement for a  cottage (in fact, a huge, Victorian house) on Little Lost Island in Maine. They are both at low points in their lives, stressed out about their children, husbands and life in New York City. Like Enchanted April, the desire and the plan take root during a pouring rain. All the better to contrast with the buoyantly sunny skies of Maine and Italy. Caroline Dester (a movie star in Enchanted August and Lady Caroline in Enchanted April) are struggling with the demands of fame and privilege.

The four occupants (the joyously optimistic Lottie, the quieter poet Rose,  beautiful Caroline and eccentric, grieving Beverly) meld into a family of sorts, even as it expands and embraces extended family members.  Maine itself is a character – ever-changing but always exhilarating, working its magic on all who spend time there. The very remoteness of the island (no cell phone service) changes how they go about their days and how they interact with each other and those off the island. There is a charmingly retro vibe to the story and the setting.

If you can’t physically get away this summer, dip into this virtual vacation between two covers, and you’ll feel as refreshed and restored as if you’d actually left your house.