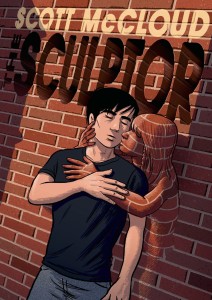 If you had one chance – just one – to make a mark in this world, to show the world the depths and heights of your talent, would you take it, even if it meant your stay on this Earth would be severely and irrevocably shortened? Scott McCloud’s graphic novel The Sculptor poses this question to the young, disgraced art ingénue David Scott. Once at the height of the New York City art scene, David is now broke, nearly homeless, and with only one friend in the world after a public falling out with his patron. Still convinced of his talent, David despairs, drinking the pain away. Until, one drunken night in a café, his Uncle Harry appears.

Except, Harry’s been dead for quite a while.

This part of the story is fairly predictable – Death, dressed up as Uncle Harry (who bears a strong resemblance to Stan Lee) offers David a deal. He will give him the power master his craft – to sculpt any material with his bare hands – but he will only live another 200 days. Of course, David takes the deal, despite a very weird encounter with what appeared to be an angel on the streets on Manhattan.

As the story unfolds, David sculpts everything he can imagine. However, the art world (or at least his only remaining connection to the art world) is less than enthusiastic about what he produces. There’s a betrayal, a death, the sudden loss of all his work, a run-in with the Russian mob and, of course, a personal revelation. But, most importantly to the story, is the angel, who, as it turns out is just an actress with whom David has fallen instantly in love with. Uncle Harry pops in from time to time with nostalgic stories and fatherly advice. All the while, the clock is literally ticking.

While the story itself is fairly predictable (David even plays chess with Death a.k.a. Uncle Harry) and the love interest is a little too manic pixie dream girl, but the journey to the end is told well. David’s raw passion and desperation is palatable and the ending twist is surprising enough to leave a mark. The best part of the book, for me, was the author’s story on the very last pages about how he came to name David’s love. Cast in that light, the story becomes more meaningful and the message more salient: live for now, lest Uncle Harry catch you wanting.

2 thoughts on “The Sculptor by Scott McCloud”