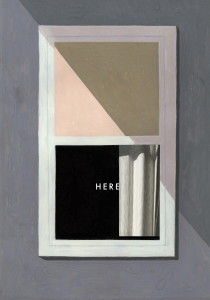 Here by Richard McGuire is a deceptively simple book. It follows one particular room of one particular home and show us what happens there, from the distant past and into the far future. The occupants (if there were occupants) or whatever is there at that particular moment are captured in a single frame, each frame layered on top of another in seemingly random order. The space we watch was not always a house, nor will it be always be. The house itself has a limited lifespan, as do whatever and whoever was and will be there.

The pages themselves are not immediately recognizable as a narrative story. But, after a while, a story does emerge. Flipping back and forth, following the years in or out of order, there is a sense of both impermanence and of the enduring. It’s not a heavy-handed lesson, nor is this book one to page through quickly.

McGuire first used this concept in 1989 in a 36-panel comic also titled “Here.” Some of the panels are available to the public temporarily via The Way Back Machine, and the full comic was published in the 2006 “An Anthology of Graphic Fiction, Cartoons, and True Stories,” edited by Ivan Brunetti.

One thought on “Here by Richard McGuire”