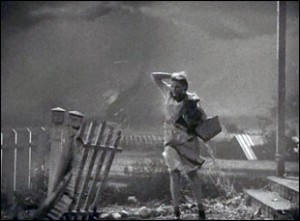 Twister The (modern) classic tornado flick starring Helen Hunt and Bill Paxton as the battling “storm-obsessed lunatics.” (All Movie Guide). There’s a complicated plot about “Dorothy,” a machine that will gather vital data about tornados as they pass over the device, and an evil competitor with a similar gizmo.

Which leads us to The Wizard of Oz , the (traditional) classic twister flick.

The tension of the brewing storm’s destruction  is built up carefully – with everyday, realistic touches. Everyone who sees this as a child can imagine themselves in Dorothy’s shoes (ha) – worrying about the darkening skies but having to go about their business. Even after 72 years, this film holds up, IMHO, as the film best able to instill a lifelong fear of storms.

Bad Behavior has blocked 1571 access attempts in the last 7 days.