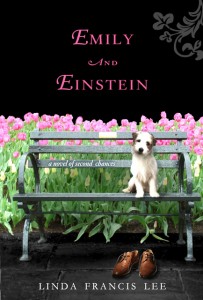 On his way to dinner with his wife Emily where he intends to ask her for a divorce, Sandy Portman – wealthy, sophisticated, self-centered – is hit by a car and dies. Furious that someone as important as himself should die so young, he makes a deal with the angel sent to retrieve him – a second chance to make things right. The only string attached? He’s coming back as a dog. An old, smelly, not-very-attractive dog to be exact.

Emily and Einstein by Linda Francis Lee is a charming story with both laughs and heartbreak. Now known as Einstein (and as a dog) Sandy struggles to come to terms with who he was as a man. Emily learns to become her own person, not defined by her Mother or sister or husband and to move on with her life. Einstein is very funny and sarcastic (he calls the angel that’s assigned to him “old man”) and Emily’s struggles are realistic. Some might label this as “chick lit”, but the issues are deeper and have more resonance than merely “getting the guy”. This is a love story on several levels, and also a story of forgiveness both of the people in your life and of yourself.  You’ll cheer for both Emily and Einstein, because everyone deserves a second chance.