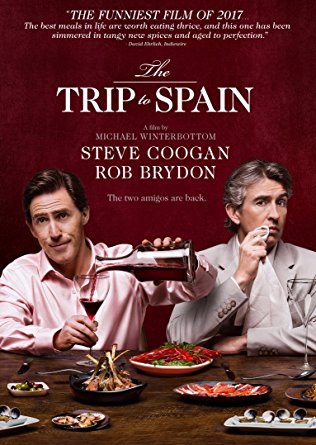 I wish I had known there were two previous “Trip” movies because I would have watched those first. I feel I was watching the twilight of what was probably a great run for actors Steve Coogan and Rob Brydon. My aspiration to visit Spain someday was the impetus behind my selection of The Trip to Spain. I certainly got what I was hoping to see in breathtaking scenic views and Spanish cuisine.

There were times I laughed so hard at the banter and celebrity impressions I couldn’t stop but about two-thirds of the way in it began to wear thin. I think this was by design since I could see that happening in real life to people with strong personalities after spending that much time together.

This film is a commentary about the fickle nature of success in Hollywood and coming to terms with becoming middle-aged men, all while lodging at gorgeous hotels and running for fitness on narrow cobblestone streets. Each man is in a different stage of life, Rob has an up-and-coming career, a wife and young children and Steve is facing a stalling career, has a twenty-year old son, and a complicated long-distance relationship with an American woman. I think there are enough issues between them for both to be relatable to many viewers.

Since our libraries have the previous two movies, The Trip, and The Trip to Italy available, I plan to watch them as well. I’ll view them as travelogues with a side of drama and humor.