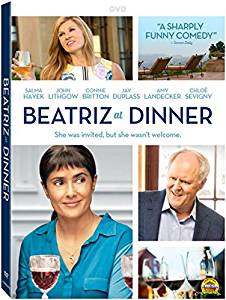 Salma Hayek plays the lead in this thought-provoking “comedy.” Although I laughed at times throughout the film, it would be more accurate to categorize Beatriz at Dinner as a drama. Hayek is finally given a break from the stereotypical sexy Latina spitfire role in which she in normally cast. She doesn’t disappoint in her portrayal of a spiritual, non-materialistic healer with a strong desire for fairness and justice. Although this character could easily have been a blonde hippie, Beatriz’s backstory as an immigrant from Mexico deepens the storyline.

The movie takes place in the grand Southern California home overlooking the ocean of one of her massage clients. Her car breaks down and her client, who also considers Beatriz a friend, convinces her husband to let her stay for his dinner with his business partners. The evening enfolds with much drama spurred on by far too much liquor and the uncomfortable pairing of people from opposite ends of the socio-political and economic spectrum in this country. Jon Lithgow matches Hayek in his performance as a Trump-era capitalist and verbal sparring ensues.

The ending has become a Google search phrase, as evidenced by my starting to type it and it popped up. I was satisfied with the movie until the end, which disappointed me at first. I read an interview with the director, Miguel Arteta, who explained, “we have gotten really used to having our ending be predigested for us.” He goes on to say he wanted an open-ended conclusion to make people start thinking for themselves. After reading the interview, I have created my own justification for the end in my mind. It worked! He got me to think for myself and not accept a neat and tidy ending fed to me by Hollywood.

Like a complex novel that merits re-reading, I might have to view Beatriz at Dinner again to dissect all of the layers and nuances. While it’s not a movie to invite your friends to watch for a lighthearted good time, it is worth watching as a Latino director and a Latina actress’ take on our current political climate.