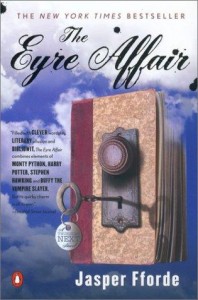 The Eyre Affair by Jasper Fforde fits into a lot of different genres:  it’s a little bit sci-fi, literary fiction, humor and thriller.  In an alternate 1985 in England, Thursday Next is a LiteraTec working to solve literary crimes (typically small-time stuff like copyright infringement).  But her career takes a more drastic turn when criminal mastermind Acheron Hades steals the original manuscript of Martin Chuzzlewit by Charles Dickens.    And so begins a game of cat and mouse between Thursday and Acheron in which she is constantly escaping death, though just barely.  Things take a turn when a character goes missing from Dickens’ novel:  it turns out that Thursday’s uncle has created a device that allows a person to jump into a literary work, and Acheron has found the device and kidnapped the character, changing the whole story.  And if his demands aren’t met, Acheron will take things to the next level and do the same to the beloved Jane Eyre herself, removing her from her classic novel and thus changing the face of classic literature forever.

It took me a while to really get into this book, but once Acheron has made the threat on Jane Eyre, it gets hard to put down (especially for a Jane Eyre fan!).  This is a very unique book, especially with the alternate history that is involved; it’s not the world that we know today, and this includes the ending to Jane Eyre itself.  If you’re into the classics and enjoy a little bit of a sci-fi edge to your books, I recommend picking up this book.

2 thoughts on “The Eyre Affair by Jasper Fforde”