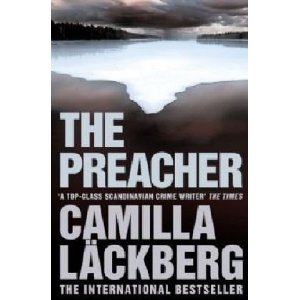 Though the recent cold and snowy weather makes us all dream of warmer places, I still can’t stop reading more Scandinavian mysteries, where the cold climate plays a major role.   The Preacher is the second mystery novel by Swedish author Camilla Lackberg – if you have recently enjoyed other Scandinavian crime fiction you may want to add her to your list.  I blogged about her first novel, The Ice Princess, a few months ago and after I finished reading this book I couldn’t wait for the next book in the series to be translated into English.

In The Preacher, again we meet Erica and Patrik who are now expecting their first child.  As a detective in Fjallbacka, a tiny fishing village in southwest Sweden, Patrik has been thrown in to a new investigation – the murder of a young tourist from Germany.  With this new case, the 30 year old unsolved disappearance of  two young women is also thrust into the spotlight – the young tourist’s body is found with the remains of these two young women.

The case takes an unexpected turn when a young girl, Jenny Moeller whose appearance is nearly identical to the murdered tourist, is kidnapped and Patrik and his fellow detectives know that time is running out to try and save her.  With Jenny’s disappearance, clues come to light that  focus the investigation on a local and radical family, the Hult’s, whose public feud only complicates the case further.  The ending is completely unexpected and shocking – definitely well worth it!

Bad Behavior has blocked 1477 access attempts in the last 7 days.