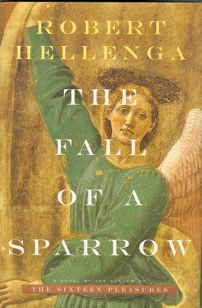 Fresh on the heels of Elizabeth Berg’s visit to the Quad-Cities, comes Robert Hellenga, author of many best selling novels. He is the keynote speaker Thursday, June 25th at Midwest Writing Center’s annual conference. This year, events are held at St. Ambrose University.

My favorite novel by Robert Hellenga is The Fall of the Sparrow, which is partially set at a liberal arts college in Galesburg (the author is a Knox College  literature professor), and partly in Italy.  Though there’s a insider feeling of intimacy when you’re familiar with the local references; the novel resonates with many themes. The main character is a classics professor  and the reader learns about Latin, Greek, Persian rugs, as well as the blues,  and shares Woody’s deep appreciation of Italian culture. 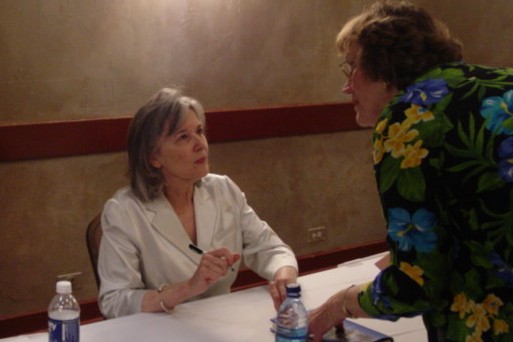 We learned that both daughters are writers (one professionally and one potentially), she’d like to serve tea to E.B. White and have a drink (vodka) with Marilyn Monroe (this in response to a question about who Berg would most  like to have tea with). She said she’d be too nervous to drink tea with White, so would rather serve him and a guest.

We learned also that the Oakbrook, IL author was a nurse before she was an author, was involved in a Second-City type of drama group in the Twin Cities, and likes to quilt but doesn’t think she is good at it.  The book she recently recommended to NPR was Beat That by Ann Hodgman – a cookbook that is just fun to read.

She talked about how devastating her experience with writer’s block was and how this led to her current book. Her daily routine of writing all morning (she normally writes till early afternoon in her pajamas and said her Fedex man must think she had a very long-lasting case of flu). She talked about her dry spell with her daughter, who suggested that she write about it. Home Safe is about Helen, a well-known novelist, who is unable to write after husband of many years dies suddenly. Helen gradually “fills her well” with life experience, such as teaching a writing class of disparate individuals (a high point of the novel). All of Elizabeth Berg’s  fans are grateful that her daughter’s suggestion was successful.

Bad Behavior has blocked 1145 access attempts in the last 7 days.