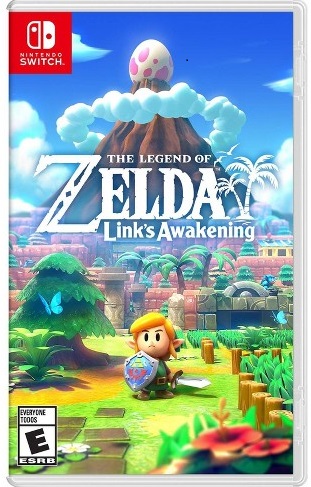 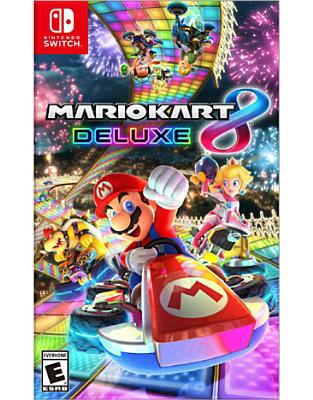 If you own a Nintendo console, you’re doing yourself a disservice if you aren’t playing any Mario games – the mustachioed plumber is Nintendo’s mascot for a reason. The Switch is no exception to this rule, and we have several Mario Switch games available here at the Library!

Mario Kart 8 Deluxe and Super Mario Party likely need no introduction. Either can be played alone, but they shine in their multiplayer modes (which the Switch is perfectly suited for). While Super Mario Party fails to fully recapture the magic of some of the earlier games in the series, it’s still a great way to spend an evening battling, betraying, and bickering with your friends – and laughing uproariously the whole time. Mario Kart 8, on the other hand, is probably the definitive Mario Kart game ever made. Chock full of courses, characters, and karts, there’s enough content here to last quite a while, and it’s customizable enough to be just as fun and accessible to newcomers as it is to series veterans.

Unlike the previous two games, Mario Tennis Aces might have flown under your radar. However, it’s just as strong a candidate for game night with your friends as the other two. You can play singles or doubles, one-off matches or tournaments, and with conventional or motion controls. Plus, unlike Mario Party and Mario Kart, it has a robust single player campaign!

And then of course we have the more traditional single-player platforming experiences: New Super Mario Bros. U Deluxe and Mario Odyssey. Mario Bros. is classic 2D Mario at its finest. It starts off a little slow, but before long the levels start to get fiendishly difficult. Odyssey, on the other hand, is the latest 3D Mario entry, and in many ways the culmination of all the games that came before it. With over 900 Moons to find across its 16 worlds, it should keep you busy for quite a while.

Last but not least, I want to leave you with a recommendation for a strange game whose very existence is surprising, and that has no right to be as good as it is: Mario + Rabbids: Kingdom Battle. This game is actually developed by Ubisoft, not Nintendo, and is a new genre for Mario: turn-based strategy. While some people may be turned off by the Rabbids, strange creatures previously relegated mostly to background roles in Ubisoft games, they’re depriving themselves of a shockingly great game. You’ll eventually unlock eight characters, from whom you choose three to make your battle team. Each character has customizable skill trees as well as a variety of weapons to choose from, lending a surprising amount of depth to this bright and cartoonishly stylized game. 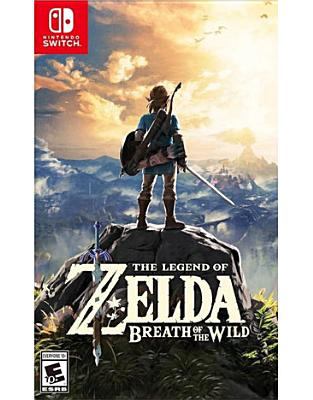 Nintendo Switch games have arrived at The Library! We now have 40+ games for Nintendo’s new portable console available for checkout, with more on the way. I have thoughts on lots of them, and they’re all worth playing, but I have to start with what has become one of my all-time favorite games.

Legend of Zelda: Breath of the Wild is aptly named, as it breathed fresh life into what is perhaps gaming’s most storied franchise. Since the release of A Link to the Past in 1991, Zelda games have followed a familiar formula: the hero Link adventures from dungeon to dungeon, finding a unique item within each that you use to solve its puzzles and slay its guardian, before finally fighting the final boss, rescuing the titular princess, and saving the kingdom of Hyrule from the forces of darkness.

Breath of the Wild marks a radical departure from this formula. Within the first hour or so, Link already has every item he’ll need for the rest of the game. More importantly, after clearing the initial tutorial area, the entire map opens up to him. He is, as Sartre wrote, “condemned to be free; because once thrown into the world, he is responsible for everything he does. It is up to him to give life a meaning.”

In real life, the concept of radical freedom can be a curse – hence Sartre’s use of the word condemned. Fortunately, life in Hyrule is a lot less complicated, and so exercising your freedom is an unadulterated blessing. The developers at Nintendo have crafted a vast, beautiful open world for Link to explore, filled with rolling plains, verdant riverlands, lush rainforests, vast deserts dotted with oases, snow-covered mountains, and more. Best of all, Link’s paraglider and ability to climb basically anything he sees make traversal a true joy, uninhibited by the pitfalls of invisible walls and insurmountable terrain so common in every other open world game.

Of course, there’s more to the game than sightseeing (although admittedly I’ve spent a large portion of my playtime with the game’s camera feature). Hyrule is not just vibrant but vital as well; there are settlements teeming with colorful characters to meet, and the wilderness is filled with outposts manned by enemies who will test your mettle. I could go on endlessly about this game, but ultimately its true joy is to be found in exploration and discovery, so rather than spoil any more of that experience for you, I’ll simply suggest that you check it out and see for yourself.