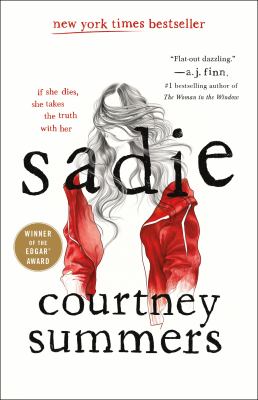 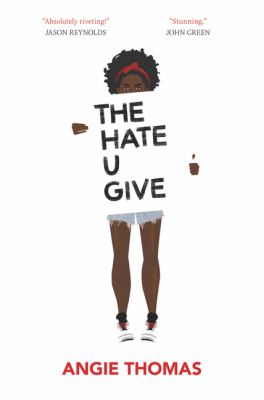 I spend a lot of time reading review journals, magazines, and online blogs about books. This helps me to order the most current books for my sections and keeps me aware of other books that are coming out across the whole library. The Hate U Give came across my radar as a book to recommend to teens about gun violence. Based on all of the talk going around about this book and its relevance to the Black Lives Matter movement, I knew I needed to read The Hate U Give if just to try to understand the power this book has.

The Hate U Give is a MASSIVE New York Times and Amazon bestseller. If the title drives you grammar nerds a little crazy, Thomas has reasons for it. The Hate U Give comes from the acronym THUG LIFE that Tupac Shakar had tattooed across his abdomen. It stands for “The hate u give little infants f**** everybody”. (If you’re offended by that word, I strongly suggest you don’t read this book. It doesn’t shy away from violence and language.) That acronym runs rampant throughout The Hate U Give and the main characters keep returning to it. It’s important. Now let’s get down to what this book is about.

The Hate U Give tells the story of Starr.  By the time she is sixteen, Starr has seen both of her best friends die as a result of gun violence: one by a gang drive-by and the other just recently fatally shot by a cop. Starr was out at a party, something she never does, when shots rang out. She and her friend Khalil took off running to his car. On their way home, they are stopped by the police, pulled over, and Khalil is shot and killed. (Obviously there’s more to the story, but I don’t want to give too many spoilers!) Starr is the only witness to Khalil’s fatal shooting by that police officer. This fact causes her a great deal of agony. Does she speak up? Obviously her parents and the cops know that she witnessed his death, but does she tell her friends? How will she react when the story is plastered all over the news? What will she do if the district attorney contacts her or if the cops want to interview her? Starr wants to stand up for Khalil, but she is afraid. How will she react if people start telling lies about Khalil? She just doesn’t know what to do.

Starr has grown up in the rough area of Garden Heights, but with a solid family backing her up. Her mother works as a nurse in a clinic and desperately wants to move away to protect the family. Her father, known as Big Mav, is a former gang-member who took the fall for King, a notorious gang lord in the community, and spent three years in prison when Starr was younger. Now Big Mav owns the local grocery store and is working to make the community better. Starr doesn’t go to the local high school; instead she goes to Williamson, a private school in a more affluent neighborhood where instead of being a black majority, she’s one of only two black kids in her school. Starr constantly talks about her Williamson self and her Garden Heights self. They’re kept separate and each Starr acts different. Her Williamson friends and her Garden Heights friends hardly ever mix. This is a life that Starr has kind of adjusted to, but the slightest bump to her normal life could cause her world to come crashing down. Khalil’s death rocks her world and Starr soon finds herself and her family the target of the police and King, the local drug lord, as everyone puts pressure on her and intimidates her in order to figure out what really happened the night that Khalil died.

The author, Angie Thomas, began writing in response to the fatal shooting in Oakland, California in 2009 of 22-year-old Oscar Grant. She quickly found the subject too painful, so Thomas set the book aside. After the stories of Trayvon Martin and Tamir Rice broke the news, Thomas knew she had to start writing this book again. Thomas had to voice her opinions, had to acknowledge the neighborhood where she grew up, and needed to shine a light on Black Lives Matter. The themes of social justice, opinion, responsibility, existing in two worlds, and violence are so prevalent and deeply explored in this book because Thomas knows what she is talking about. She lived it.

This book has been optioned for a film and is in development. I can only hope that the movie is just as moving as the book was. The movie has the opportunity to further change the world.

Betty Anne Waters is a young woman whose world is shattered when her beloved brother Kenny is convicted of murder and sentenced to life in prison. Steadfastly convinced of his innocence, Betty Anne embarks on an 18-year journey to set Kenny free, using state-of-the-art forensic technology. The unshakable bond between a brother and sister at the heart of this real-life drama will stir your emotions and inspire you.

Kathy, Ruth, and Tommy are best friends who grow up together at an English boarding school with a chilling secret. When they learn the shocking truth that they are genetically engineered clones raised to be organ donors, they embrace their fleeting chance to live and love.

For Marnie, high school was a horror movie, and her brother’s wedding is the sequel when her archrival comes back to haunt her as his bride. It’s nice girl versus mean girl in this hysterical reunion with the one person Marnie would really like to forget. And if that weren’t enough, Marnie’s mom reunites with her own high school nemesis.

Life As We Know It – Josh Durhamel, Katherine Heigl

Holly is an up-and-coming caterer and Messer is a promising network sports director. After a disastrous first date, all they have in common is their dislike for each other and their love for their goddaughter Sophie. But when they suddenly become all Sophie has in this world, Holly and Messer must set their differences aside. Juggling career ambitions and competing social calendars, they’ll have to find common ground while living under the same roof.

A vibrant world where friends and strangers dream, fear, cry, love, and laugh out loud in an attempt to find their true selves. Adapted by writer/director Tyler Perry from Ntozake Shange’s acclaimed choreopoem, this gripping film paints an unforgettable portrait of what it means to be a woman of color in the modern world.

An engaging and inspiring look at public education in the United States. This documentary has helped launch a movement to achieve a real and lasting change through the compelling stories of five unforgettable students such as Emily, a Silicon Valley eighth grader who is afraid of being labeled as unfit for college, and Francisco, a Bronx first grader whose mom will do anything to give him a shot at a better life.

A runaway train, transporting deadly, toxic chemicals, is barreling down on Scranton, Pennsylvania, and only two men can stop it: a veteran engineer and a young conductor. Thousands of lives hang in the balance as these ordinary heroes attempt to chase down one million tons of hurtling steel and prevent an epic disaster.

Expectant first-time father Peter Highman looks forward to his new child’s due date five days away. As Peter hurries to catch a flight home from Atlanta to be at his wife’s side for the birth, his best intentions go completely awry. An encounter with aspiring actor Ethan Tremblay forces Peter to hitch a ride with Ethan on a cross-country trip that will ultimately destroy several cars, many friendships, and Peter’s last nerve.

Season 6 of this highly acclaimed series turns over a new leaf when pot-selling soccer mom Nancy Botwin tries to leave behind her illegal operations. Includes the complete Season 6 with all 13 episodes.

Over the years, Megamind has tried to conquer Metro City in every imaginable way. Each attempt is a colossal failure thanks to the caped superhero known as ‘Metro Man,’ until the day Megamind actually defeats him in the throes of one of his botched evil plans. Suddenly, the fate of Metro City is threatened when a new villain arrives and chaos runs rampant, leaving everyone to wonder if the world’s biggest ‘mind’ can actually be the one to save the day.