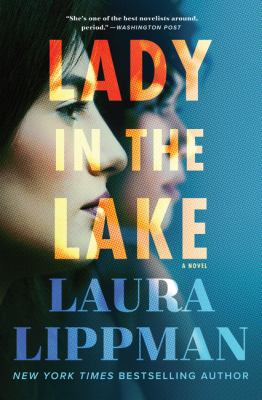 I had not heard anything about this book before I checked it out on OverDrive, but the plot appealed to me right from the beginning as it’s a twisty thriller with a noir feel. Mysteries abound in Lippman’s newest book as a housewife decides to upend her entire life in order to make a new name for herself.

Lady in the Lake  by Laura Lippman is a psychological thriller mixed with elements of classic crime noir set in 1960s Baltimore. Madeline ‘Maddie’ Schwartz is a housewife, happy with her pampered easy life. Well, she was satisfied with that life up until this year when she decided to leave her eighteen year marriage to start over and live a passionate life that was more meaningful.

Starting a new life, Maddie wants to make a difference. After learning of a young girl’s disappearance, she decides to help police look for the girl. Using those interactions as a step-up, Maddie works her way onto the staff of the city’s newspaper, the Star. Trying to make a name for herself, Maddie is on the lookout for a story that will help her rise to fame. She finds the story of a missing woman whose body was found in the fountain of the park lake and decides to investigate.

A young African-American woman who enjoyed a good time, Cleo Sherwood disappeared one night. No one seems concerned with how the woman ended up there, so Maddie begins to dig into her disappearance. Cleo’s ghost is not happy with Maddie poking around into her life and death. She just wants to be left alone.

This book changes perspectives between many different characters as readers learn about the characters on the periphery of Maddie’s life. As she looks into Cleo’s murder, Maddie investigates a wide number of people, but fails to truly see what lies right in front of her. Her inability to see this leads to dangerous consequences for herself, those closest to her, and the people she comes into contact with on a daily basis.

If you have the chance, I highly recommend that you listen to the audiobook version of this book. Since this book jumps around to multiple points of view, the narrator is able to add different accents, dialogue, and authentic speech to each character. This definitely made the listen more than worthwhile and helped me keep the multitude of characters separate in my head.

Lippmann based the crimes that occur in this book on two real-life disappearances. If you’re interested in learning more, Lippman did an interview on NPR’s All Things Considered that covers her inspiration.