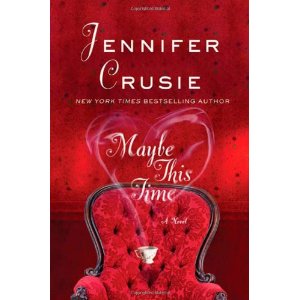 After the quickest courtship on record and one year of marriage, lonely Andie left workaholic North in Maybe This Time by Jennifer Cruise. Ten years later, she comes back with unwelcome news: she’s marrying someone who will appreciate her.

North wants Andie to be happy, so he stalls her by offering her a job while he investigates the new fiancé. She hasn’t touched any of her alimony, but maybe she’ll accept a paycheck. Besides, he really does need her help taking care of his recently orphaned niece and nephew, who have driven off every caretaker he’s found for them since the mysterious death of their aunt. And who knows…maybe this time she’ll stay.

Andie agrees to move into the remote and crumbling Archer House and prepare the kids to move into less Gothic surroundings. Two weeks, tops, and she’ll be planning her wedding to a man who won’t let her down. But when two implacable remnants, a nympho ghost and a soulless investigative reporter threaten her and the kids she’s starting to call her own, who’s she gonna call?