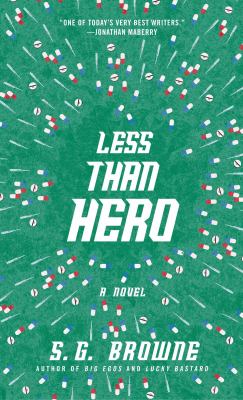 Usually I’m wary of books that have quotes written on them from authors or publishers saying, “best writer” or “visionary of our time,” so when I saw Less than Hero on the new cart, my heart sunk a little seeing, “One of today’s very best writers” written across the front. The premise, volunteers who test experimental drugs for cash who then inadvertently turn into side-effect superheroes, immediately caught my interest though and I decided to give this book a try.

In Less than Hero, S.G. Browne has written an arrestingly witty and sarcastic nod to the pharmaceutical industry and superheroes, which I found to live up to the high praise splashed across the front cover. Llyod Prescott finds himself at the age of thirty living as a guinea pig of pharmaceutical drugs with no real direction in his life. He has a group of other guinea pig friends that he meets up with every now and then to talk about the trials that they are taking part of, a side gig pan-handling for money in a variety of locations across New York City, as well as a pixie of a girlfriend who has already saved his life once before. Lloyd is living a stagnant and regular life that’s going in no real direction until one moment when his lips go completely numb and he is struck by utter exhaustion. Letting out a giant yawn, Lloyd finds himself instantly refreshed, but is astonished to find that the stranger next to him has inexplicably fallen asleep.

Lloyd then does what any other superhero would do: tries to keep it a secret and practices on his girlfriend Sophie’s cat. When this slumbering event happens three times on its own to humans around him, since, Lloyd says, it’s important to create a pattern, he meets up with the rest of his guinea pig buddies to see if they have any weird side effects. They do and they all team up to fight crime! With powers ranging from rashes to vomiting to sleeping to convulsions to sudden weight gain, they head out across New York City to set out their own kind of justice on criminals. Through the book, Browne includes interludes about how they discovered their powers and also newspaper articles about two villains running amok in New York, Mr. Blank and Illusion Man. These two villains exhibit superpowers that Lloyd eventually realizes could actually be prescription drug side effects as well. Lloyd and his rag-tag bunch of superhero friends decide that the only thing they can do is to use their superhero abilities for good and they work on honing their talents, so they may then take on those evil villains.

Browne has crafted a superhero book outside the ordinary that is creatively sarcastic and witty about not just things that maybe might not happen, but about things that could happen in our pharmaceutically drugged society.

Bad Behavior has blocked 1300 access attempts in the last 7 days.