This summer, I had to say goodbye to two of my favorite graphic novel series (aside from Marvel’s Secret Wars, which I’m still trying to process) “Fables” by Bill Willingham & Mark Buckingham and “The Unwritten” by Mike Carey and Peter Gross. I discovered both series in the middle of their publication. Happily, I had a several volumes already published to get me started until I began the grueling wait for new installments.

(Since this post is talking about an entire series, there may be spoilers. Look out for Hawkeye* – he’ll let you know.) 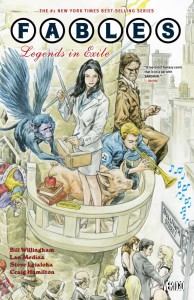 The first TP (trade paperback) of Vertigo’s Fables, “Legends in Exile” was published in 2002, and began with the murder of Rose Red, Snow White’s sister. We learn that the characters in classic fairy and folk tales are alive and (mostly) well and living in exile from their magical homelands, having been driven out by the malevolent “Adversary.” Now, they live in our world (the “mundy” as in “mundane”) using magic to protect their fantastical origins. Now, Old King Cole is the mayor of Fabletown, Snow White is the capable Operations Director and The Big Bad Wolf (or Bigby, as he is called in his human form) is the head of security. Those who do not have human form live on The Farm, mostly free to do what they please. We meet many, many other fairy tale characters through the series, with most carrying some semblance of their personalities we know from the story books. But, as we learn, they are far more complex than we mundies know them.

The first plot arc follows the resistance of and eventual all-out battle against The Adversary to regain the Homelands. Smaller plots are intertwined, introducing us to the motivations, conflicts and loves of the Fables. New and deadlier threats rise, war ensues and families are made (and broken). With such a rich source of characters, Willingham takes many liberties developing their personalities. Heroes are cads, cowards prove themselves to be kings and unlikely romance blossoms.

Issues #1-75 (volumes cover the first story arc of the war against The Adversary. There are also spin-offs and diversionary stories that focus on characters like Jack (of Jack and the Beanstalk, who ends up getting his own comic “Jack of Fables”), Cinderella and the Frog Prince among many others.  Some of these stories serve as good character development, other are complete stories. On the whole, most are entertaining, but as the series went on, I found myself skipping entire sections and skimming the rest.

Of course, as one evil is vanquished, another rises. To me, it seemed a bit much, and that the series could have ended there quite well. The new adversary, Mr. Black, while certainly threatening, didn’t quite fit within the world of Fables and wasn’t entirely developed aside from being dark and scary and entirely one-dimensional. More side stories and spin offs took center stage, none of them really adding a lot of value to the main story. In particular issues 102-106, collected as “Super Team” was just ridiculous (Ozma and a few other characters dress up as superheroes and hijinks ensue.) But, I hung on, just in case something better was coming down the line.

What brought me back was “Cubs in Toyland” (issues 114-121). One of Snow and Bigby’s children (who they call “cubs”) is taken to a bleak land inhabited by discarded toys. What follows is a devastating story of childhood loyalty and sacrifice.  The previous volume “Inherit the Wind” (issues 108-111) touches on what the cubs will face as they grow, and “Cubs in Toyland” drives it home. 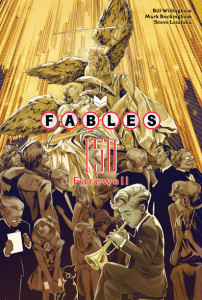 Over the remaining issues of the series, the story returns to what has become the central conflict of Fables. Not simply good vs. evil or Fables vs. Mundies, but the question of fate and free will. In the beginning, we learned of the long simmering rivalry between Snow and Rose Red; indeed, most of the conflicts across the series are driven or influenced by their relationship. In the final volumes, it is this essential conflict that all the Fables must reckon with.

The final volume of the series “Farewell” ably ties up loose ends, with enough room left to wonder. I was relived when Willingham announced that Fables was ending. Too many good graphic novels (and TV shows)  sort of peter out and disappoint when there’s no end planned. Readers lose interest, and the authors tend to lose focus or worse, ruin the entire series with twists and retcons. Fables does not succumb entirely to those pitfalls and while a little weak in the middle, the overall series is definitely worth reading.

* Hawkeye Vol. 2: Little Hits by Matt Fraction and David Aja. Read it. It has a pizza dog.

One thought on “From Beginning to End, Part 1: “Fables””