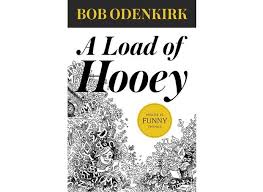 You may recognize Bob Odenkirk as the character Saul Goodman from the AMC drama, Breaking Bad and its spin-off, Better Call Saul.  But Odenkirk has been a comedy writer for a long time and he has written many things that have made you laugh over the years.  He got his start at Chicago’s Second City and went to write at Saturday Night Live alongside Robert Smigel and Conan O’Brien.  Odenkirk is the creator of beloved SNL character, motivational speaker Matt Foley, portrayed by Chris Farley.  He also wrote for Late Night with Conan O’Brien, The Ben Stiller Show, Get a Life, The Dennis Miller Show, and Mr. Show with Bob and David.  A Load of Hooey is Odenkirk’s first book of sketch comedy.

A Load of Hooey is in print and on audiobook.  I listened to the audiobook and I’m glad that I did.  Bob Odenkirk is one of the voice actors, along with David Cross, Jay Johnston, Jerry Minor, Megan Amram and Paul F. Tompkins.  Listening to these talented actors made an already funny book even more delightfully funny to listen to.  Who knew that you could laugh at Hitler?  Bob Odenkirk made that happen.  I laughed at Adolph Hitler thanks to the talented writing of Bob Odenkirk.  And it is not just hated people that Odenkirk writes sketches of.  Nope. He even goes after beloved former Beatle Sir Paul McCartney.  And it’s funny.

So if you enjoy watching sketch comedy, need to listen to a book in the car, don’t have a lot of time, (this audiobook is 2.5 hours long) and you want to laugh, I recommend checking out the audiobook, A Load of Hooey by Bob Odenkirk.  Or you can read it.  But it’s funnier to listen to.  But you should check it out, either format.