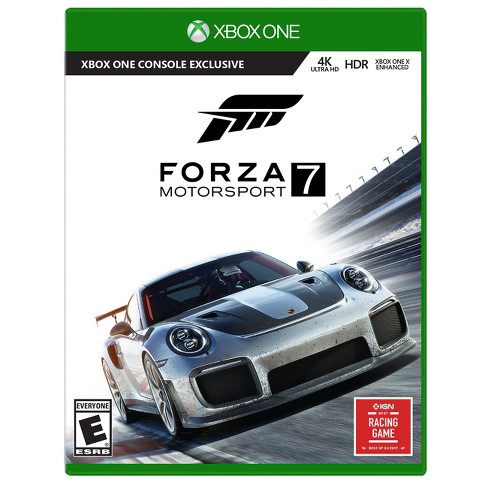 Forza Motorsport 7 is a racing simulator developed by Turn 10 Studios for the Xbox One. This Xbox exclusive is the latest in a long line of games that date back to the original Xbox console. Forza Motorsport 7 is one of the most robust racing games on the market with a plethora of ways to play and have fun for all experience levels.

The single player campaign follows the Forza Driver’s Cup, a series of 6 championships that are further broken down by divisions and once you beat enough divisions in each championship, you unlock the next one. Throughout this process, the player is continually unlocking new things. Cars, upgrades and even driver suits. Hours of racing can be spent in this mode alone.

Customization another mode that players can sink their time into and that doesn’t even involve racing. Like Forza games before it, Forza Motorsport 7 has deep and robust customization features, you can create practically any paint scheme you can think of or create new ones. Hours can be spent tuning your car and making it look as cool as it can be and that is all before you even hit the race track.

Online multiplayer is still receiving regular updates with new hoppers and modes being added every month with new competitive features being added in June. This game is constantly receiving new content that keeps the racing fresh for players looking to battle it out with racers from around the world.

If this sounds like a fun time, we have Forza Motorsport 7 available for check out on the Xbox One at the Davenport Public library.