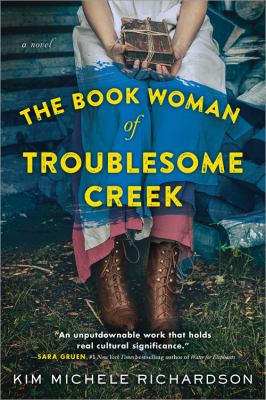 In 1936 Cussy Mary Carter is the “Book Woman”, working as a librarian with the Kentucky Pack Horse Library Project. She brings books, friendship and news of the outside world to isolated families in remote parts of the Appalachian Mountains of eastern Kentucky. Cussy is also one of the last of the blue people of Kentucky, people who’s skin appears blue, a trait that makes her stand out when she wants to blend in.

The Book Woman of Troublesome Creek by Kim Richardson follows Cussy as she makes her way through a difficult life. It is books and the love of reading that keeps her going and bringing books to her patrons that makes her happy. Her work with the Kentucky Pack Horse Library brings her a lot of satisfaction, but it is a difficult and often dangerous job, especially for a woman alone in the wilderness. The trails are rough and often unpassable, many of the country people distrust anything to do with the government and actively discourage her or turn her away. Some refuse to talk to her because of her color (having her leave their books on the porch). The Pack Library has to make-do with cast-offs from other libraries with sadly worn and out-dated material. Yet Cussy treats everyone with kindness and compassion and slowly (some) people begin to accept her.

Now, if you read “people with blue skin” and thought “science fiction” or “Avatar” and think this book isn’t for you, think again! The blue-skinned people of Kentucky are real, their skin color caused by a very rare genetic condition called methemoglobinemia that causes their skin to appear blue. They are descended from a man who moved to the Troublesome Creek area of Kentucky in 1820. Because of the remoteness and isolation, the people often intermarried, passing the blue color on to their children. Today it is easy to mask the blue skin color (they are perfectly healthy otherwise) but in 1936, superstition against anyone with blue skin causes them to isolate themselves. They are considered “coloreds” and in some ways face even worse discrimination than the African Americans. Some believe that the blue is an indication that they are possessed by the devil and try to “baptize” them (that is, drown them in the creek) to save them. Others are afraid to touch or be touched by a blue-skinned person, thinking that they will turn blue too.

There’s a lot going on in this book – the Pack Horse Library, the devastation that the Great Depression is causing, the local mine and its iron hold on its workers and the plight of the blue-skinned people of Kentucky, all based on fact. There’s almost too much going on toward the end which feels a little rushed, but that is a minor quibble. The Book Woman of Troublesome Creek is a treasure trove of nearly forgotten historical facts, the power of books and friendship and the beauty of these wild, remote mountains. Highly recommended.