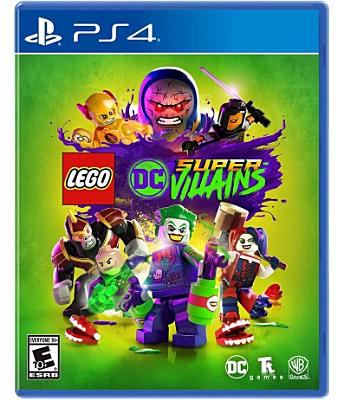 Lego DC Super-Villains is a Lego game from Traveller’s Tales. If you have played Lego games in the past, this one should seem familiar to you. You break stuff, get studs, solve puzzles, and build stuff, all while playing as some of your favorite characters. This coupled with the Lego game’s signature coach co-op means that you can play through the game by yourself or with a friend. This game shifts the focus away from caped crusaders to the nefarious super villains of the DC universe.

There are over 170 playable characters, both villains and super heroes, for you to play as. These range from characters that you know and love such as The Joker, Lex Luthor, Batman and Aquaman, to more obscure DC characters such as Clock King and Condiment King.

This game is unique because of how it integrates the character creation feature into the story. Usually in Lego games, you play as your favorite characters and get to play as them throughout the game. In Lego DC Super-Villains, however, you get to make your own villain named The Rookie that you get to play as an upgrade as you progress through the game.

Another fun game for the whole family to enjoy from Traveller’s Tales. Lego DC Super-Villains is available at the Davenport Public Library for both Xbox One and PS4.

Bad Behavior has blocked 1391 access attempts in the last 7 days.