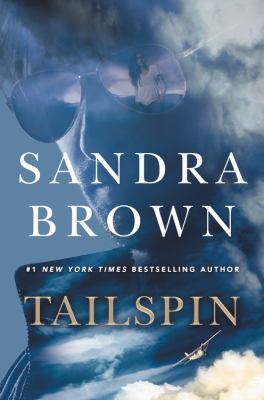 There are some authors that I know I can pick up a book by and not be disappointed with what they wrote. Sandra Brown is one of them. Her books spin thrilling stories of romance and suspense that keep me wanting more from beginning to end. Brown’s novel Tailspin was my latest read/listen and I finished it in two days!

Tailspin is the riveting story of Rye Mallett and Dr. Brynn O’Neal. Mallett is known as a ‘freight dog’, a pilot who can be called to fly anywhere in the  world at anytime of day in any weather. Mallett is put to the test when he is called last minute to make a flight during stormy weather in order to deliver a black padlocked box to a demanding client. With his background as a fighter pilot in Afghanistan, not much scares Mallett and he isn’t going to let the weather hold him back, even though all the airports are grounded and no other pilot would even think of flying in that weather.

Despite a rough flight, Mallett makes it to the small somewhat dangerous runway where he is to meet the doctor charged with picking up his precious mysterious cargo. Coming in for a landing, something happens to Mallett that results in a near crash. After getting off the plane, Mallett has a run-in with Dr. Brynn O’Neal, who is not the doctor that he was expecting.

Mallett doesn’t trust Brynn. Even though her intentions are noble, Mallett feels like there is something that Brynn is holding back. This doesn’t bother Brynn because she doesn’t trust Mallett either. Mallett is unpredictable and is an erratic variable that threatens to destroy Brynn’s forty-eight hour deadline. Despite their uneasiness towards each other, circumstances have necessitated that the two reluctantly team up. They are soon racing against the clock, different levels of law enforcement, and people who are willing to kill for the contents of that black box for a high-level client.

Bad Behavior has blocked 1325 access attempts in the last 7 days.