Helen Van Dale: A woman of the criminal underworld Part I

Most individuals living in the Quad Cities are familiar with the name John Looney. From his home base across the Mississippi River in Rock Island, Illinois, Looney created an illegal empire that included gambling, prostitution, protection money, and illegal alcohol starting in the early 1900s. His control included Rock Island, Davenport, and surrounding towns.

It was only with his permission that “disorderly houses” or “resorts” (which involved gambling, prostitution, and later illegal alcohol) could be opened. Protection fees were paid by the owners to Looney along with his input in how many women could work at the resorts and who supplied the alcohol to the establishments. Many of these businesses operated under legal business titles such as soft drink parlors, boarding houses, or hotels.

Looney’s underworld empire flourished until 1922, when the murder of saloon owner William “Bill” Gable on July 31st of that year led to a gang war that soon resulted in the death of Looney’s only son and the arrest of notable underworld figures including Looney himself. However, this blog isn’t about John Looney, but someone else.

One woman played a central role in this criminal world from the late 1910s into the early 1920s. Her name was Helen Van Dale. She arrived in the Quad Cities an unknown young woman soon involved in prostitution, but Helen would rise to local prominence by the early 1920s, so the rumor goes, as the one person John Looney feared.

Then just as quickly as Helen Van Dale became a frequent headline in local history, she disappeared into the unknown until recently.

With a few genealogical clues, we were finally able to piece the details of Helen’s life together and have an ending to her story. We thought we would share her story in her birthday month of July. We will only touch on the underworld crime scene of the Quad Cities in the late 1910s into the 1920s here, but we strongly encourage readers to do more research on this fascinating subject.

We have put together a history of Helen Van Dale’s life and the lives of those involved with her for this blog.

On July 18, 1893, Eula Elizabeth Lee was born in Paris, Edgar County, Illinois near the Indiana border to James Perry and Nancy Jane Lee.  Through U.S. Census research, we find in 1900 the family of three living in Paris, Illinois with James working as a day laborer.

By the 1910 U.S. Census, the family had grown with the birth of Eula’s sister, Lillis (recorded in the census record as “Dimples”, her lifelong nickname), in 1902. The family had left Paris and moved to Galesburg, Knox County, Illinois near the Rock Island/Davenport area. James Lee was now a fireman working with the railroad.

This is the last U.S. Census we find James and Nancy living together. Soon after 1910, James relocated to Peoria, Illinois and remained there. His family did not move with him. He filed for divorce from Nancy in Peoria County, IL. The divorce was finalized September 17, 1926. 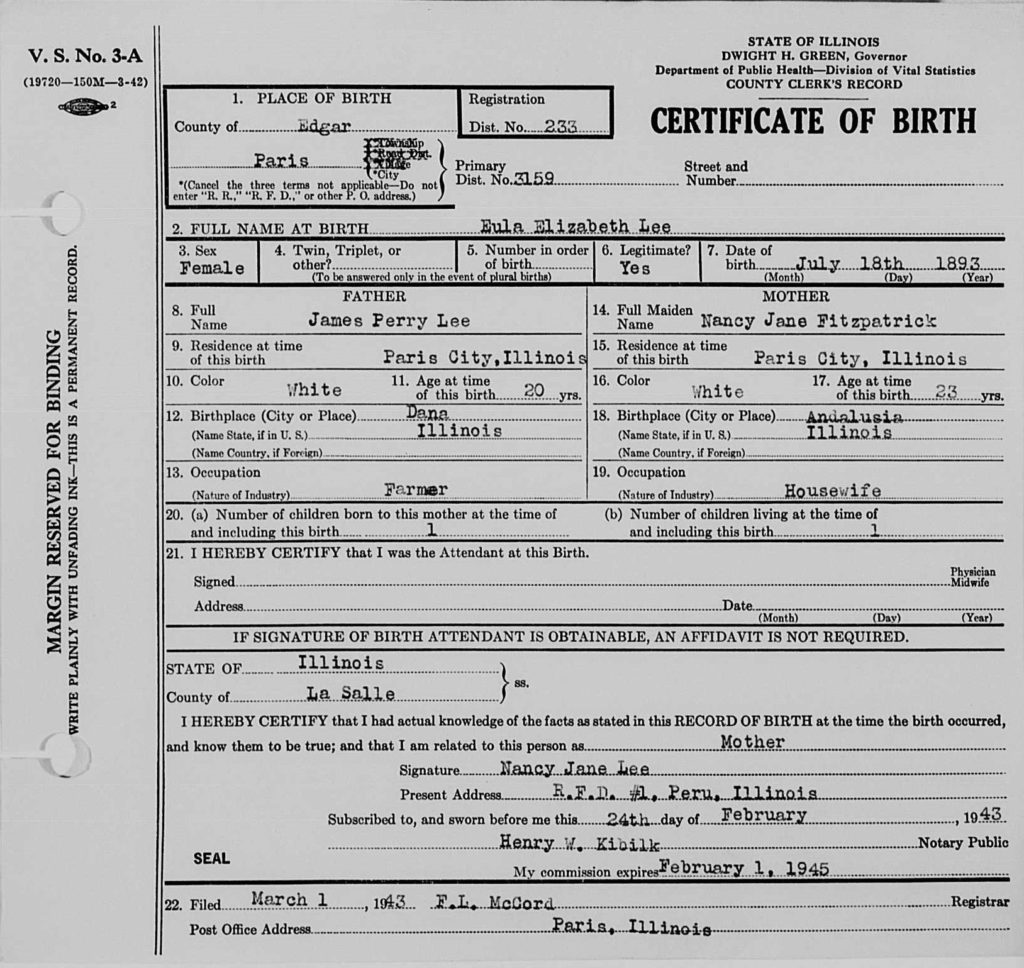 When Eula was about 17 years old, the United States government passed the Mann Act on June 25, 1910. This Act prohibited the transport of girls and women for the purpose of prostitution or debauchery. This Act would later have a major impact on Eula’s life.

We learn from the 1910 U.S. Census that then 19-year-old Robert lived in Moline, Illinois and worked for the U.S. Government as a Lock Tender. He was working as a stagehand when he married Eula. 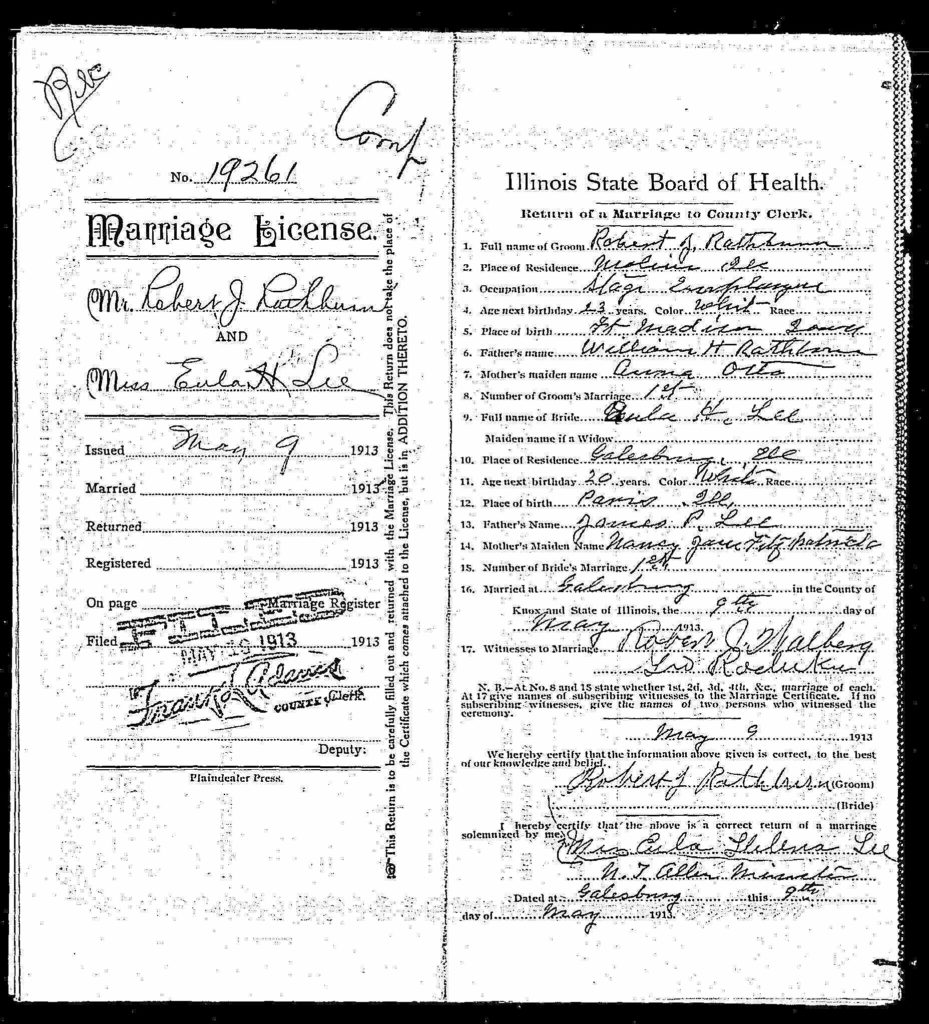 Eula filed for divorce from Robert in 1914 in Knox County, Illinois. The divorce record names her as Catherine Helena Lee Rathburn. She accused Robert of being a habitual drunk, going off on “sprees”, adulatory, and cruelty in physically abusing Helen. The divorce was granted on August 1, 1914 with Helen requesting the use of her maiden name Lee.

Katherine Helen as her first and middle names. She used Catherine/Katherine mainly on official documents for the rest of her life while Helen became the name she used daily. Occasionally, she added an “-e” or “a” to Helen.

In December 1914, Mrs. Mary Van Dale of Rock Island, Illinois filed for divorce from her husband, Henry. She asked for custody of their only child. The reason for the divorce was Henry, a bartender, had become involved with a Helen Howard who operated a restaurant at 2109 Fourth Avenue.

We believe Helen Howard was the former Eula Lee. We know in May 1915 from newspaper records that a Helen Howard was arrested and fined $25 and costs for running a “disorderly house” called Waukeska located in Rock Island on 16th Street between 1st and 2nd Avenues. Interestingly, a Lester Smith was also arrested in the raid. They were both arrested by Detective Tom Cox of the Rock Island Police Department. Both men would have a greater place in Helen’s life in the near future.

Helen Howard continued to be in the newspapers during 1915, arrested for running “disorderly houses”. The newspapers mention that once a house was shut down in Rock Island, the girls would leave town for Davenport until an arrest there would have them returning to Rock Island. 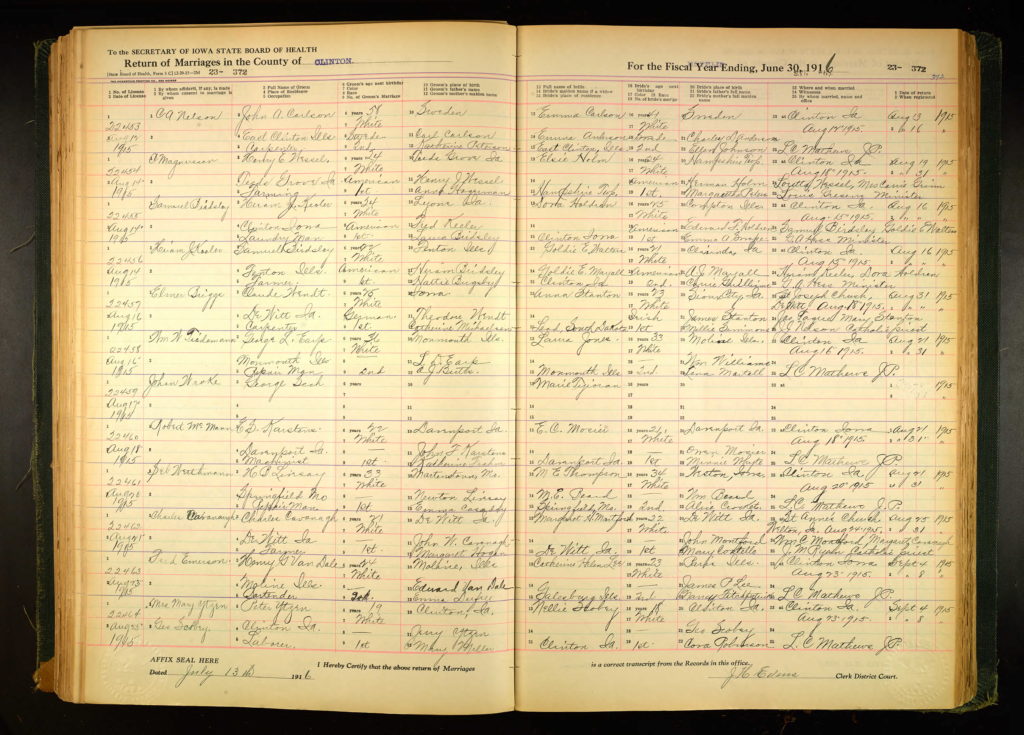 Over the next few years, Helen gained favor with John Looney as she soon operated multiple “disorderly houses” in Rock Island and Davenport with girls being moved between the establishments.

In June of 1918, we find the record of a Mrs. Florence Smith filing for and receiving a divorce in Rock Island County from her unfaithful husband Lester “Society” Smith. This is the same Lester Smith arrested in 1915 at the Waukeska with Helen. Soon after the divorce, Lester Charles Smith served in the military from September 3, 1918, through November 27, 1918. After discharge, he returned to Rock Island.

In April 1919, Catherine H. Van Dale filed for divorce charging her husband, Henry,  had married her within a year of his previous divorce.

On May 1, 1919, Detective Tom Cox (who arrested Helen Van Dale and Lester Smith at the Waukeska in 1915) was promoted to Police Chief of Rock Island.

On May 9, 1919, Helen Van Dale and Lester Charles Smith were married.

Soon after their marriage, Lester “Society” Smith began to appear frequently in the newspapers for various arrests.

Helen Smith filed for and received a divorce from Lester Smith on January 15, 1920.

Around the time of her divorce from Smith, rumors began that Helen Van Dale (as she was still commonly known) was keeping company with Police Chief Tom Cox. Another local rumor was Cox began to spend a great deal of time in girlfriend Helen’s establishments, which were filled with Looney associates.

On January 12, 1920, the U.S. Census recorded Helen’s mother Nancy and her younger sister, Lillis, as still living in Galesburg, Illinois. The two women moved to Davenport in 1920 after the U.S. Census was taken and began to help Helen with her growing business of “disorderly houses”.

Lillis gave birth to her first son with Victor Joseph Ciesielski in October 1920 in Davenport. She married Ciesielski in February 1921 in Scott County, Iowa. Victor, known by the alias Heinie Lee, was involved with Looney’s operation and worked in Helen’s establishments. They would divorce in June 1923 with Lillis receiving custody of their two children.

Helen’s mother and sister appear to manage the Davenport part of the business while Helen oversaw Rock Island. Two of her most important houses were the Palmer Inn in the Nahant Road area of Davenport and the building at 2327 Fourth Avenue in Rock Island. Originally, the focus of these establishments most likely involved gambling and prostitution with John Looney using various methods of corruption to keep everyone in line with him.

With the passage of the 18th Amendment and the start of Prohibition on January 17, 1920, a new element was added into local disorderly houses and underworld crime as bootlegging and illegal alcohol became a new source of revenue to fight over.

Illegal alcohol soon was another fixture in Helen’s resorts. Helen is rumored to have also begun providing women for resorts in other cities and states.

By 1922, Helen was a successful figure in underworld crime. She appears protected by both John Looney and Tom Cox. But not everyone was happy with the special treatment Helen received. One individual who was growing tired of Looney and Van Dale was William “Bill” Gable who owned a “soft drink parlor” and “resort” next to Helen at 2319 Fourth Avenue, Rock Island.

While Helen was rarely raided on the Rock Island side of her business (Davenport raids were frequent), Gable was raided by the Rock Island Police several times and was still paying protection fees and other fees to Looney. Helen’s fees were reduced or nonexistent.

Whispers began that by late spring 1922, Gable wanted out. He wanted to leave the underworld scene behind him and start legitimate businesses. More whispers began that he had seen something in Helen’s Fourth Avenue establishment involving Tom Cox that greatly upset Gable. Other whispers stated he was talking to Federal Agents and had been given police protection.

It was nearly midnight on the night of July 31, 1922, when Gable drove to his establishment at 2319 Fourth Avenue and parked his car. He got out, walked around his vehicle and stepped on the sidewalk. No one knows if he knew a large car had been following him that night. His police protection having been told to stay at the station for duty. 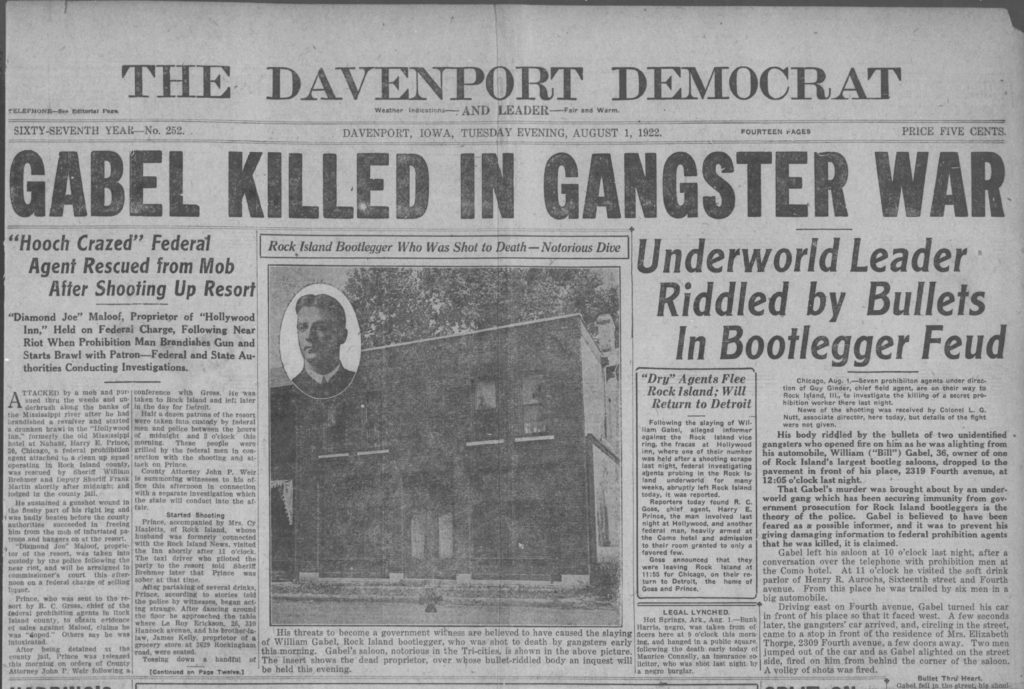 The world of Helen Van Dale and her colleagues was about to change.

Who will talk? Who will stay silent?

And what does the future hold for Helen Van Dale?