On March 15, 1894 a unique business filed for incorporation in Scott County, Iowa. Named the Home Cooking Company its intentions were for the manufacturing and supplying of food and confectionery. Stocks were listed at $20,000 with $1,500 to start operations. 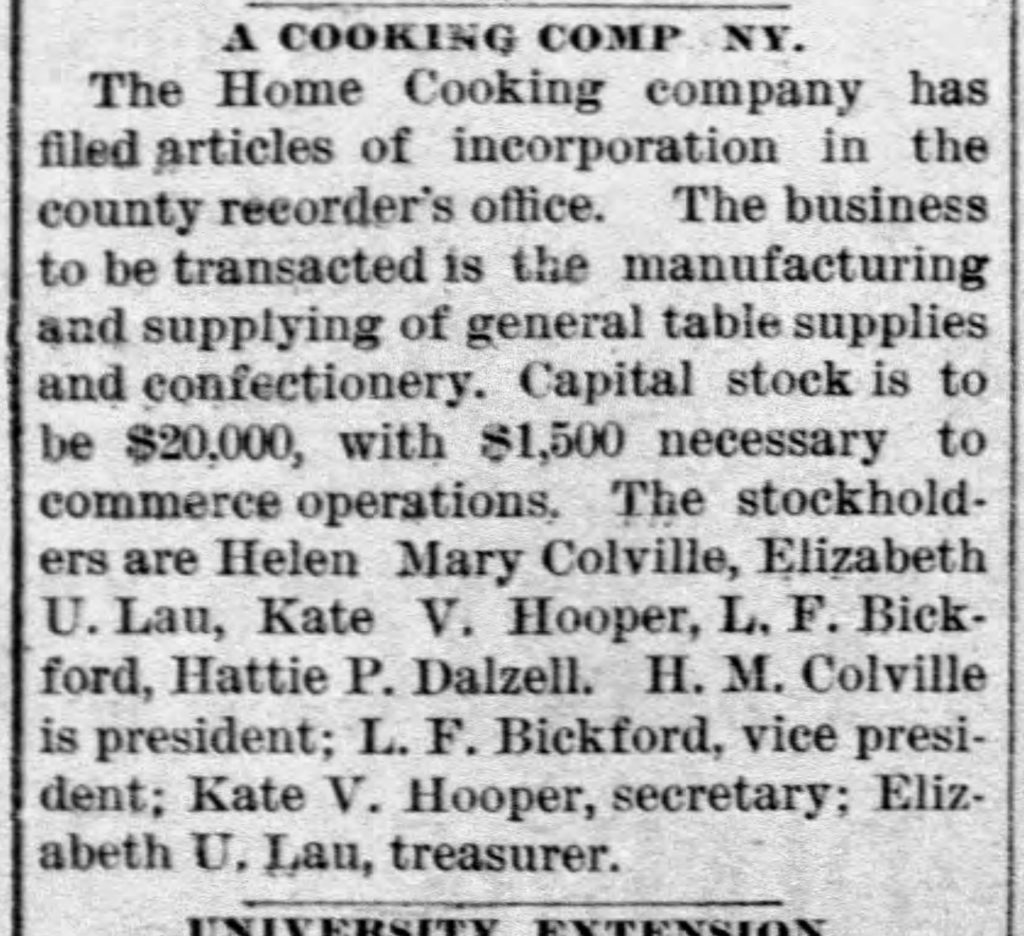 It opened at 221 Brady Street in Davenport as part bakery, part restaurant, and part take-out meals. A clever idea in the ever-growing city.

The unique part of the venture was the stockholders who developed the idea and put up the money. All were single never married women in their thirties.

These five women willing to chance their savings were:

Kate V. Hooper – Born April 7, 1863 in Massachusetts. Died April 17, 1907 in Davenport, IA. She moved to the area as a small child, was educated in local schools, and became a schoolteacher until severe arthritis caused her to retire. It was about the time of her retirement she helped start the Home Cooking Company. Kate also helped start the Lend-A-Hand Club.

L. F. Bickford – Lile Frances Bickford was born in 1855 in New Hampshire. Died February 1932 in Deming, New Mexico. She moved to Davenport to become the first matron of the Clarissa Cook Home for Friendless Women. Lile also helped start the Lend-A-Hand Club before the Home Cooking Company. In the early 1900s, she moved to Deming to live with family. There, she helped start the local library.

Harriet (Hattie) P. Dalzell – Born May 3, 1863 in Davenport, IA. Died July 17, 1897 in Davenport, IA. Born and raised in Davenport; Harriet was a stockholder in the company. She never left her teaching job to run the business. She taught in the Davenport schools for over 20 years before her death.

By June 1894, the business appears to be doing successful trade as a notice was placed in the papers that due to high demand for service; any special dish orders needed to be made 24 hours in advance to allow time for them to be made and delivered.

The company seemed to consider all options for patrons. Bakery goods, restaurant meals geared towards local businessmen, picnic food in the summer, holiday dishes, and take home/deliver meals for a busy housewife.

By the January of 1895, a cooking teacher was hired from Cincinnati, Ohio. Miss Emily Colling was a Philadelphia cooking school graduate who would teach cooking classes in the newly expanded upstairs portion of the Home Cooking Company.

Even by expanding into the upstairs floors of 221 Brady Street, the business was forced to close the first floor restaurant portion on April 1, 1895. The demand for baked goods and take home meals was overwhelming the space. Newspaper accounts stated the women hoped to find a more suitable restaurant space soon.

Newspaper advertisements in October 1895 indicate the business was still expanding, as more help was needed in different departments.

Suddenly, in April 1896 a new wanted advertisement appeared in The Morning Democrat.

It would appear the restaurant portion of the business was for sale.

Miss Julia Dillon decided to purchase the restaurant business in June of 1896. She moved the Home Cooking Company restaurant to 315 Brady Street. Advertisements indicated while the address had changed, the concept of the business had not. 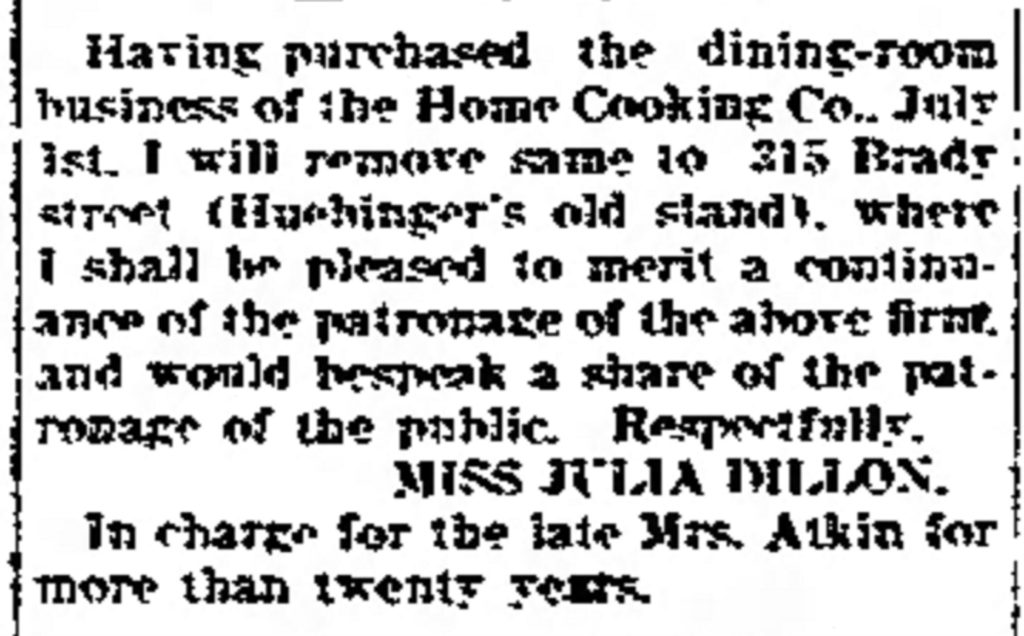 The baking and cooking portion of the business expanded again with the opening of a household science department in December 1896. It was also announced that the President of the company, Miss (Helen) Mary Colville, would be retiring. 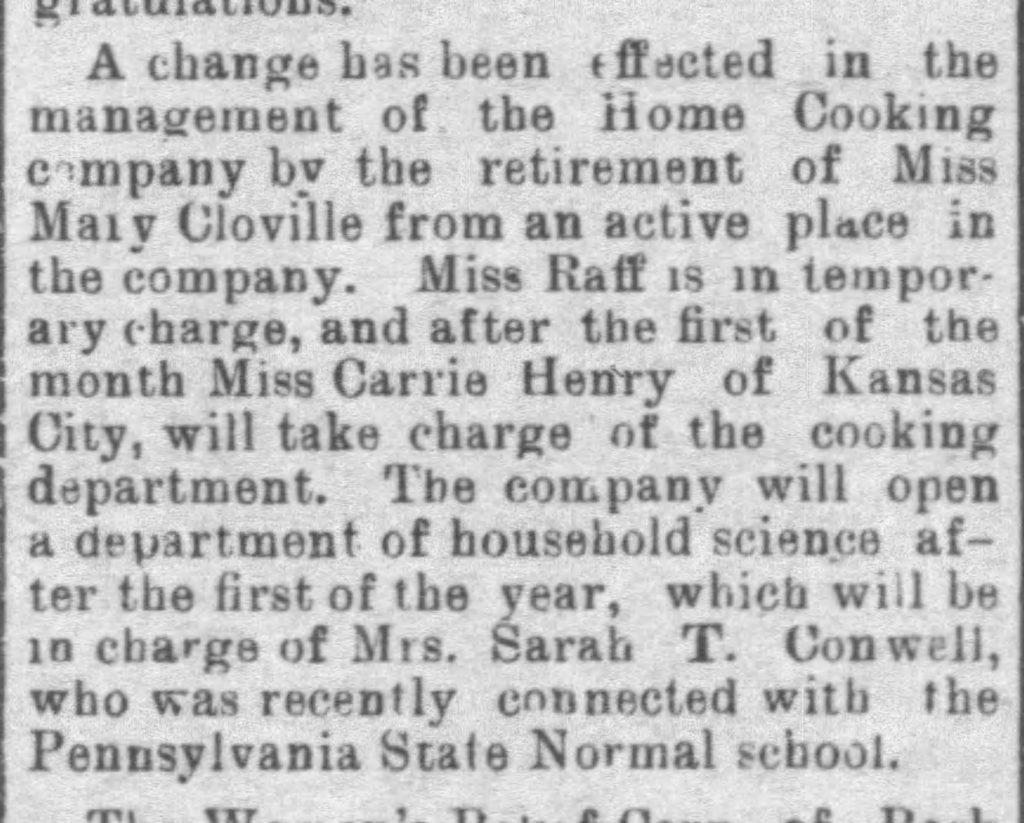 The first sign of trouble began in the spring of 1897 when department heads began to leave for other positions. This probably seemed unusual as the business seemed as popular as ever.

In May of 1897, the Home Cooking Company was officially sold to new owners. All original stockholders had retired from the business. 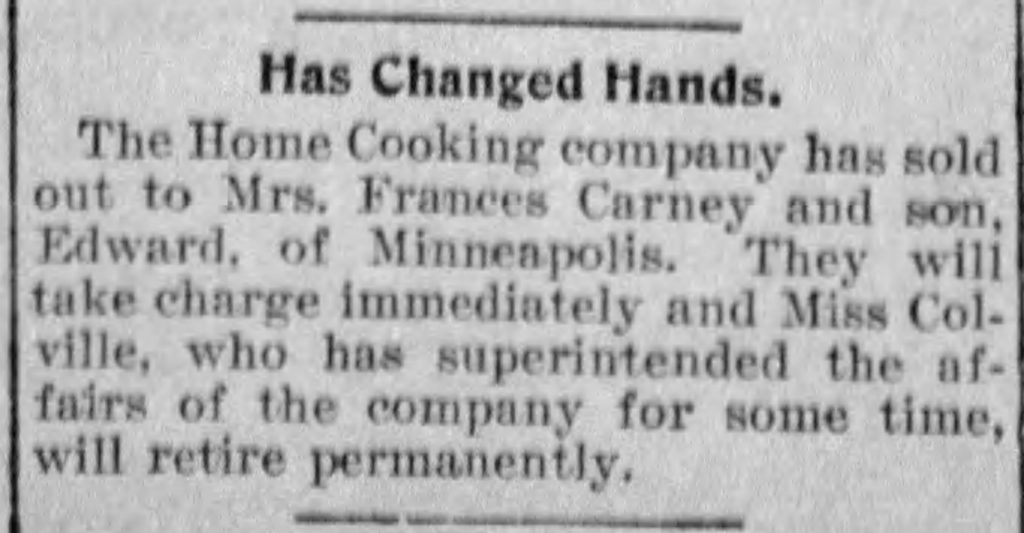 On November 29, 1897, the Home Cooking Company bakery and take-out business closed its doors without warning. Newspaper accounts listed poor business practices by the new owners as the reason the business ended. Almost immediately, an auction was held to sell off pieces to pay debts.

The successful business venture of five enterprising ladies was no more. One can admire the entrepreneurial spirit these women had. The long hours of baking and cooking in pre-air conditioned kitchens for not only a restaurant, but also producing take home meals as well.

221 Brady Street still stands in Davenport. Drive or walk by sometime. One can almost imagine the bustle of activity, the long hours, and the spirit that created the Home Cooking Company.