On Sunday, June 17th, 1923, a near record crowd of 3,640 people attended the annual basket picnic of the Davenport lodge No. 28, Loyal Order of Moose at Forest Park.

Attendees enjoyed a program of games and outdoor sports, including a baseball game between married men and single men, horseshoe pitching, a guessing contest, and athletic contests, with prizes for the winners donated by Davenport businesses. The Moose 36-piece band put on a concert that afternoon.

At 8:15 pm, a horrifying scene unfolded on the figure eight roller coaster, advertised as “the largest and safest west of Chicago”. The first car made it over the first dip and was almost to the top of the second incline, 45 feet above the ground, when it started slowing down, came to a stop, then slid backwards to the bottom of the dip and partly up the opposite slope. The car slid forward again and up the incline for a short distance and backwards once more, finally coming to a stop in the bottom of the dip. The second car, which had been released a few seconds before, crashed down into the first car, injuring 10 people. 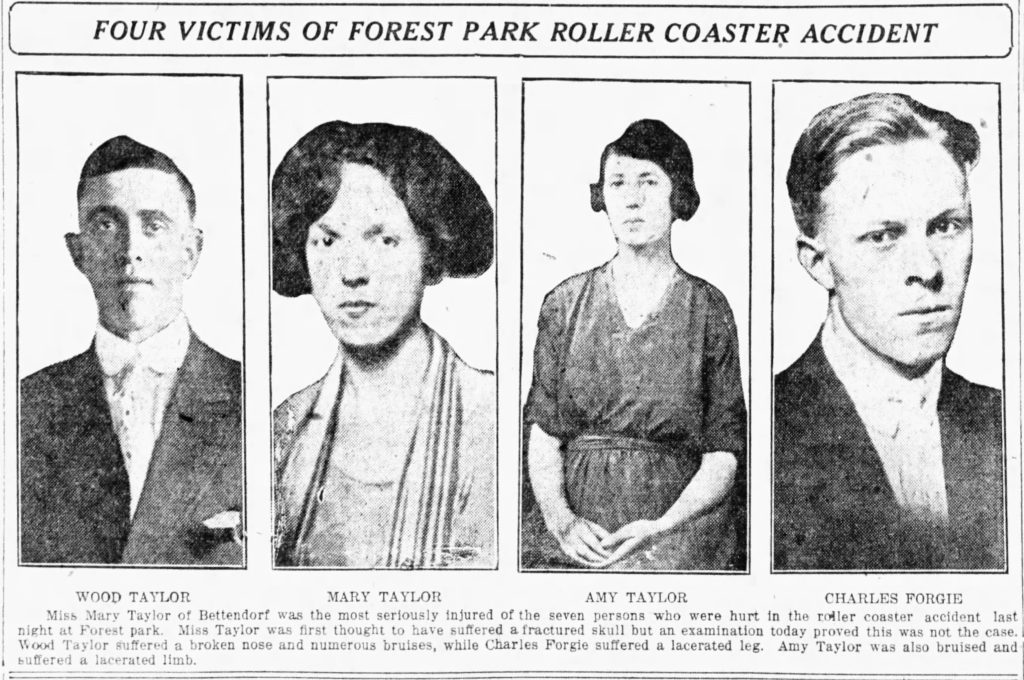 The victims and their injuries:

Amy Taylor, age 18, was knocked unconscious in the crash, had a bruise on her forehead and a lacerated leg.

Woods Taylor, age 29, had a broken nose and bruises on his arm and leg.

Charles Forgie, age 18, had bruises and cuts on his leg and several teeth knocked out.

Robert Montague suffered from shock and was slightly bruised.

Duncan Estes, age 13, was bruised and had a cut on his knee.

An unidentified boy, age 10, sprained his ankle after jumping off the second car and falling 15 feet to the ground.

Daniel O’Connor, a heavyset man,  had scratches and slight bruises after jumping from the second car, landing on a trestle which gave way under his weight, then falling 10 feet onto another projection.

The coaster was inspected the next afternoon by building commissioner Ed McCoy, who found a bent axle on the first car, which would account for it failing to make the grade. Safety clutches were ordered to be installed as well as an automatic device that would indicate to the starter when the first car had passed the second big dip before releasing the second car. 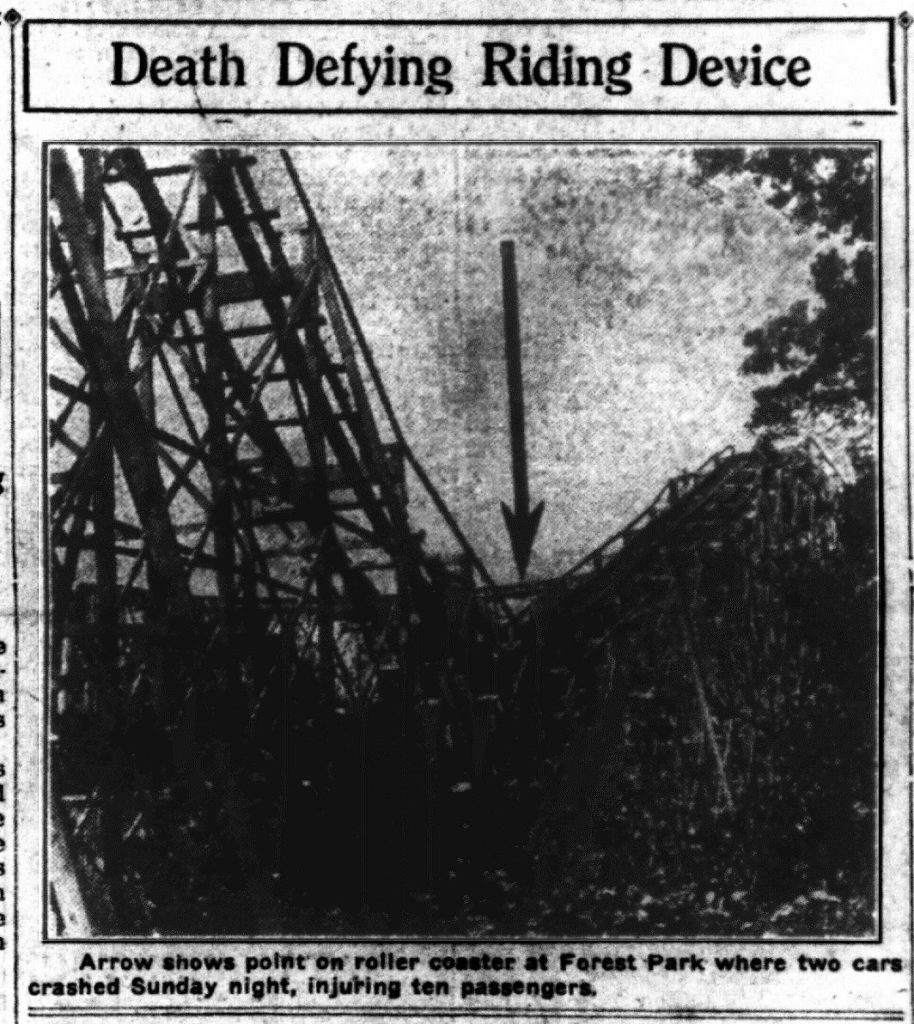 This was not the first roller coaster accident at Forest Park. On Sunday, July 31st, 1921 at 8:35 pm, 7 people were injured when the first car failed to make a slight grade on the final rise onto the platform and slid backwards, swaying back and forth on the dip until a second car crashed into the rear of the first. That wasn’t enough to stop the amusements for the evening because two hours later another person was injured in a second accident exactly like the first. A broken brake shoe on one of the cars was to blame for these two incidents.

The victims and their injuries:

Fred Fick, injuries to the head and body

The figure eight roller coaster at Forest Park, formerly and currently known as Schuetzen Park, opened on Sunday, June 20th, 1920, during the festivities for the 68th Anniversary of the Davenport Turners. The amusement park was  managed by Tobe Watkins, who still had eight years left on his ten year lease from the Davenport Shooting Association.

The coaster itself was built and operated by the Davenport Coaster company, which was incorporated on May 4th, 1920 by three men from Rockford, Illinois: Charles O. Breinig, president; H. S. Burpee, vice president; and Paul Stick, secretary and treasurer. The company spent $15,000 on amusement devices at Forest Park.

The amusement park closed after Labor Day in 1923. The grounds had been sold to the Chiropractic Psychopathic Sanitarium Co. on May 1st of that year, and the inn, bar room, bowling alley, and music pavilion had already been converted into living quarters for patients and attendants. Manager Tobe Watkins had been allowed to continue his lease for the summer to give Davenporters one more season at the old amusement park.

The Roller coaster was torn down by the City in October 1926 as it was deemed a menace to public safety. 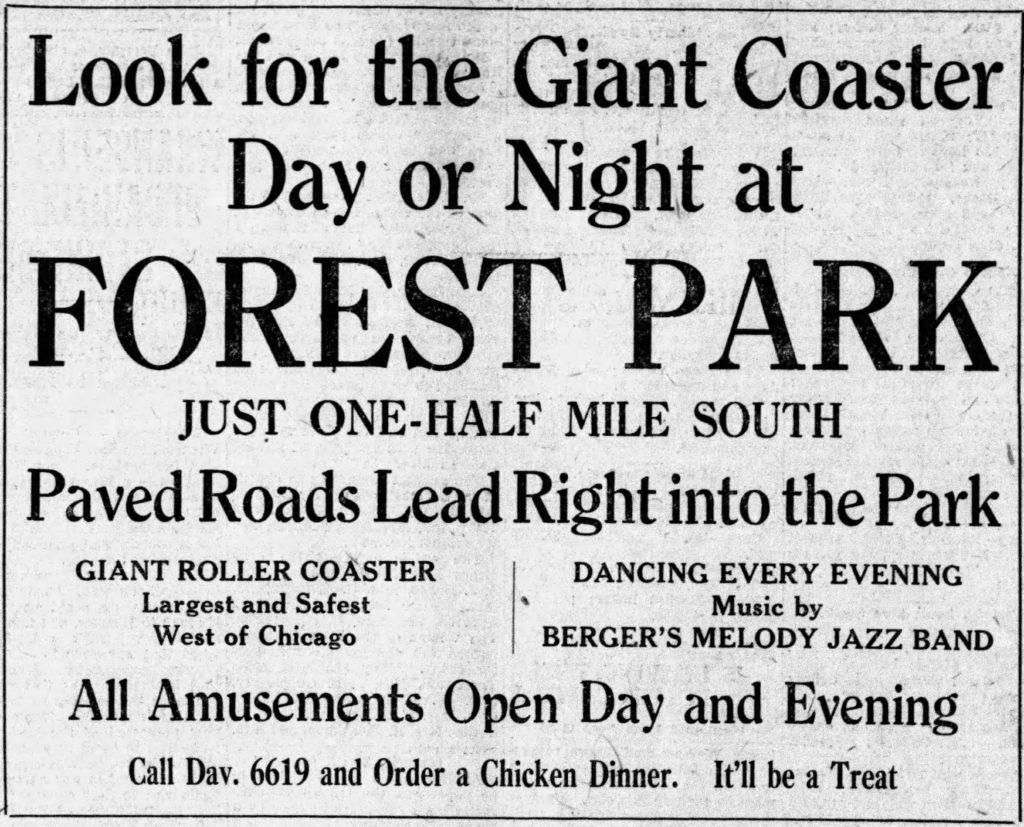 Bad Behavior has blocked 551 access attempts in the last 7 days.