Davenport City Cemetery: Preserving and celebrating the past 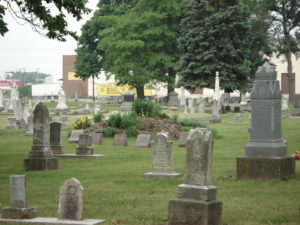 In honor of National Cemetery Month and Memorial Day, we are taking a moment to highlight the history of Davenport City Cemetery and this Saturday’s dedication of headstones for veterans of the Civil and Spanish-American Wars.

The original five acres of land were purchased from Asa and Electa Green on May 10, 1843 by the City of Davenport. The sale of private burial lots began in September of that year. A section of the cemetery was also designated as Public Burial ground where families could choose to either bury a loved one themselves for a small fee or pay a slightly higher amount for the Sexton to dig the grave.*

Many of the individuals buried in the Public Ground may have only had small handmade markers that have vanished over time due to Midwestern weather, flooding, or vandalism. Today this section (on the east side of the cemetery) looks like an open green space, but is actually the burial ground for hundreds.

In 1849, the descendants of Asa and Electa Green sold an additional 6.48 acres of adjoining land to the City of Davenport to expand the cemetery. In January of 1863, he first lot was sold in the “New,”or west, section of the cemetery.

Over the years, City Cemetery became the final resting place for thousands of local citizens including:

The last burial in City Cemetery is believed to have taken place around 1986. The cemetery is no longer managed by a Sexton; it is now under the care of the City of Davenport Parks and Recreation Department.

Though the burials have ended, caring and maintaining the cemetery for those who rest there and their families has not.

The newest contribution to the preservation of the cemetery is the unveiling and dedication of 20 headstones for veterans of the Civil War and one headstone for a veteran of the Spanish-American War. The dedication ceremony will take place on Saturday, May 27, 2017 at 1:00 p.m. The public is invited to attend this event, which is being coordinated through the Veterans Recruitment and Services at St. Ambrose University.

The headstones were received for free through the Department of Veterans Affairs program. Volunteers Kory Darnall and Coky Powers spent hours going through burial information to identify veterans, searching for supporting documents, and working with the Davenport Parks & Recreation Department to submit all the requiried materials to the program.

In addition to the dedication at 1:00 p.m. on Saturday, there will be volunteers available Saturday through Monday, May 27, 28, and 29 from 12 to 4 p.m. to answer questions and discuss the history of the cemetery.

We hope to see you there!

*A City of Davenport Ordinance passed May 10, 1849 stated graves must be dug 5 feet in depth and length to allow a coffin or rough box to buried. The Sexton was paid by the City Council $2 for the burial of a person 11 years or older, $1.50 for ages 2 – 10, and $1.00 for ages 0 – 2.  An additional dollar was charged for digging a grave at night. Friends or relatives were allowed to dig a grave themselves as long as they stayed within the above-given dimensions. The Sexton received a $ .50 recording fee for those burials.

Like Loading...
This entry was posted in Genealogy, Local History and tagged Davenport City Cemetery, Davenport Parks and Recreation, veterans. Bookmark the permalink.

6 Responses to Davenport City Cemetery: Preserving and celebrating the past

Bad Behavior has blocked 818 access attempts in the last 7 days.