A Forgotten Oasis: The Pavilion at Central Park

In May 1899, plans were unveiled for a new addition to Central Park (renamed Vander Veer Park in 1912). Architect E. S. Hammatt had been hired by the Davenport Park Commissioners to design an open-air structure to serve as a bandstand and gathering area in the park.

The location for the new building was the northern edge of the park, just south of the greenhouse near the large pond. It was described in the newspapers as being 50 x 70 feet with enough space for large groups to gather. It was a story-and-a-half in height with bathrooms and storage areas in the lower section. The upper open-air section was accessible by large stairways on all four sides. (1) 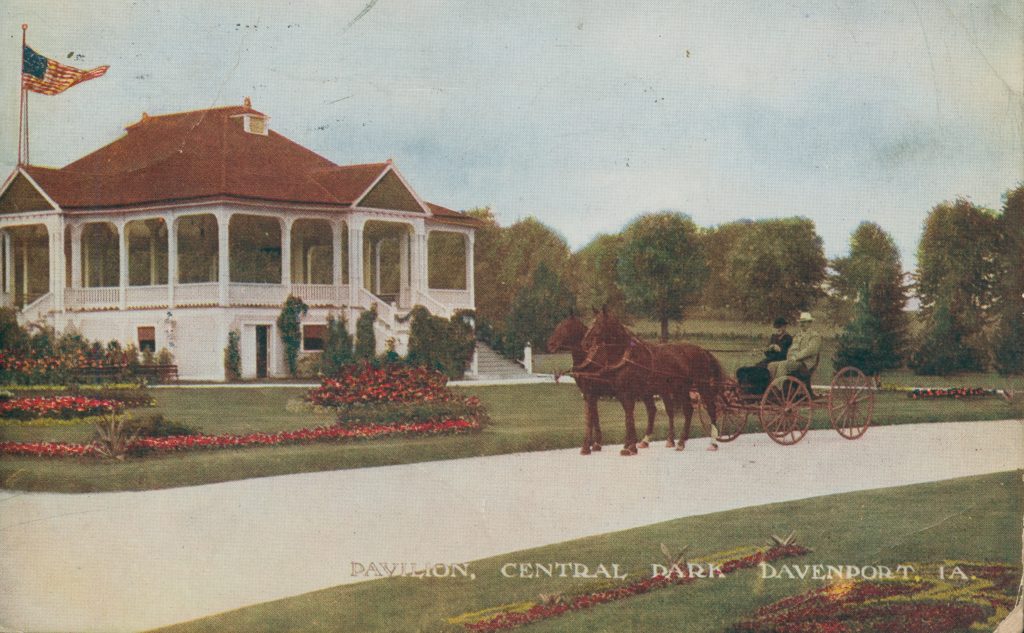 The Pavilion at Central Park before a portion of the upper level was enclosed. Postcard #Parks VV PC 004.

Soon after the structure was built, the Park Commissioners decided to enclose the central part of the upper section and add a restaurant. (2) 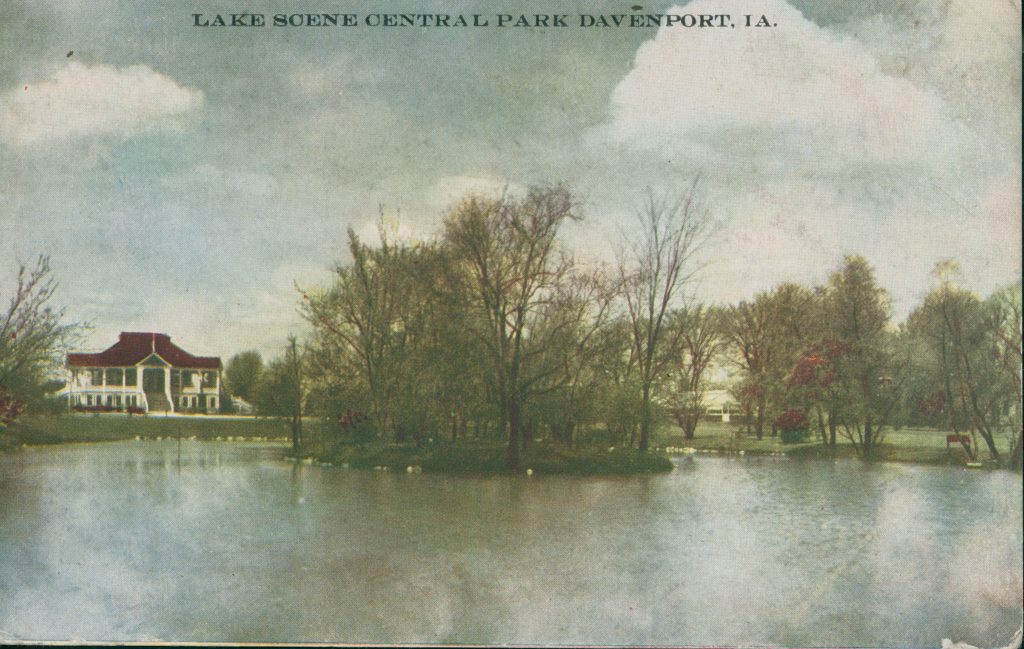 Large pond in the front and greenhouse to the right of the Pavilion. Postcard #Parks VV PC 036. 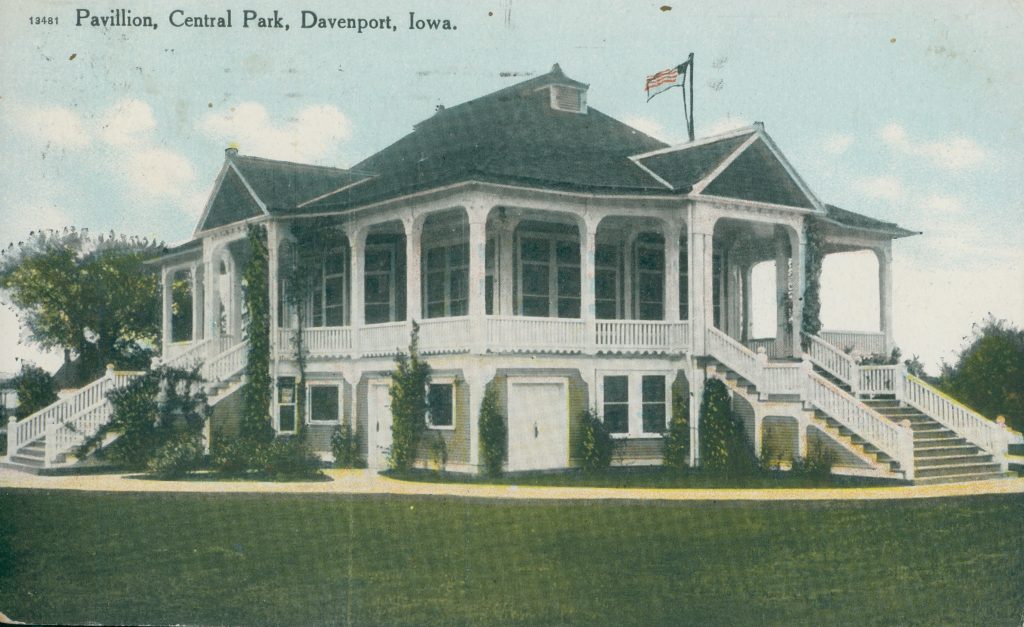 Closer postcard view of the Pavilion after changes to the upper level.  Postcard #Parks VV PC 029.

What a delight it must have been to sip a lemonade under the shade of the Pavilion and gaze out over the picturesque pond and greenhouse!

In the annual report for 1919-1920, the Park Commissioners informed the Davenport City Council that the “…decision to take down the pavilion in order to save coal, repairs and painting was carried out; the heating pipes and radiators were stored; the toilet fixtures moved to the basement in the Utility Building; the steel ceiling to the Comfort Station in Fejervary Park; the lumber, frames, doors and windows to Credit Island; the foundation stones to Fejervary Park and will be used for filling in the deer and elk yard.” (3)

We were amazed to find such a complete description of what happened to the building and its materials!

This final look at the Central Park Pavilion comes courtesy of our collection of images from the Hostetler Studio in Davenport: 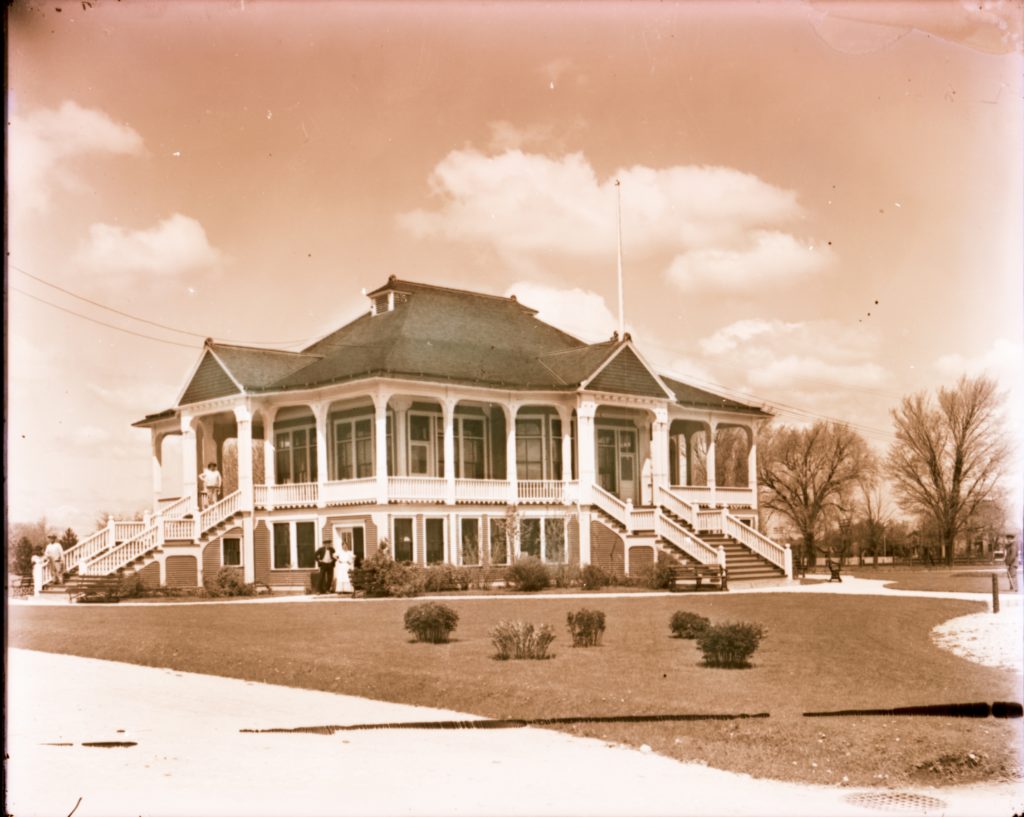 Enjoy a relaxing summer at Vander Veer and other City of Davenport parks!

Bad Behavior has blocked 840 access attempts in the last 7 days.