It’s Opening Day at Modern Woodmen Park Stadium, thanks to the Depression-era Dreams of the Davenport Levee Commission

In honor of the 2017 season, we thought we would look back at the early history of Modern Woodmen Park.

Baseball has been a popular sport in Davenport since the mid-1800s. Over time, baseball associations developed to help organize baseball games between local cities. In 1901 a new organization formed when the Davenport River Rats became a charter member in the Illinois-Indiana-Iowa League (also known as the Three-I League).

Fans soon discovered the fairgrounds baseball field was lacking in modern amenities compared to Douglas Park in Rock Island and Browning Field in Moline. Its distance from downtown Davenport was another mark against it, as fans had to spend money on public transportation or extra gas for their vehicles to attend games.

By early 1930, the Davenport Blue Sox’s managers, the Davenport Baseball Club, began to worry that the outdated field would threaten the team’s place in Mississippi Valley League.

With an interest in keeping baseball in the city, the Davenport Levee Commission stepped in to help fill the need for a new modern stadium.

On September 17, 1930 the Davenport Levee Commission authorized the construction of a municipal stadium with a preliminary cost estimate of $60,000. The initial plan was for a baseball park, a football field, practice softball/baseball fields, tennis courts, and playgrounds to be built. The complex would occupy the property between Gaines Street and LeClaire Park, and from the railroad tracks to the riverfront.

Close proximity to downtown Davenport, easy access from Rock Island and Moline, and the potential to create a large parking area were among the benefits touted by the Levee Commission.

With lights for night games, the stadium would allow the Blue Sox to compete with other teams in their franchise whose stadiums had been similarly updated.

In the announcement for what they then called the Municipal Stadium, the Davenport Levee Commission made it clear the stadium was not being built for baseball only. It was intended as a recreation center for the citizens of Davenport to enjoy year-round.

The Levee Commission pushed to start building the facility before plans were even finalized. Mr. Walter Priester, secretary, stated, “One of the paramount reasons for immediate work on the stadium is to give employment to many in Davenport.” With the beginning of the Great Depression, employment opportunities were scarce, and the Levee Commission wanted to put as many local men to work as possible.

Ground was broken on the project in early November of 1930. The Levee Commission quickly decided to increase the budget by $100,000 to provide for a more permanent grandstand and work along the riverfront.**

The dedication of the Davenport Municipal Stadium was held on May 26, 1931, at the start of the first afternoon baseball game. With the increase in cost to build a more substantial grandstand, all other planned recreational areas were put on hold. Also on hold was the idea to build a park area running from the baseball stadium west to Credit Island. 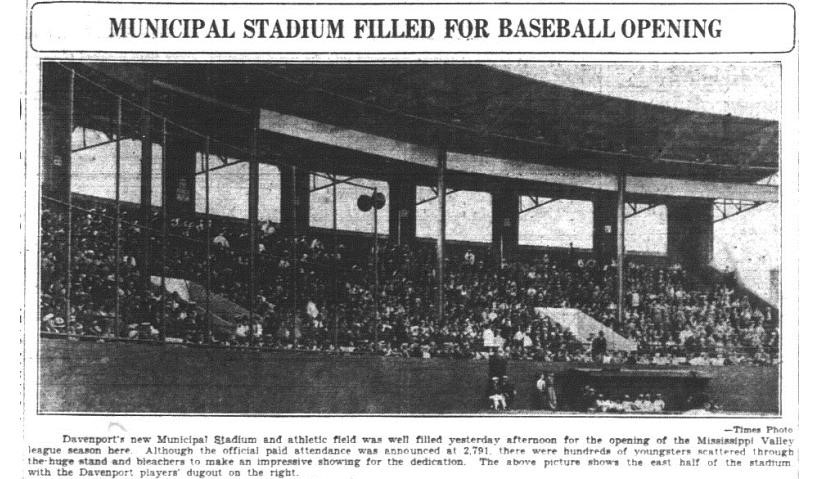 That afternoon, the Davenport Blue Sox beat the Dubuque Tigers in a score of 7 to 1.

The first night game was held on June 4, 1931. Over 3,000 spectators came to watch Davenport play against Rock Island under the glare of lights mounted on six 100-foot steel towers. One can imagine that even the Blue Sox’s loss that night did not diminish the excitement of watching an illuminated night game. It was reported that the glow of the lights could be seen from miles around. 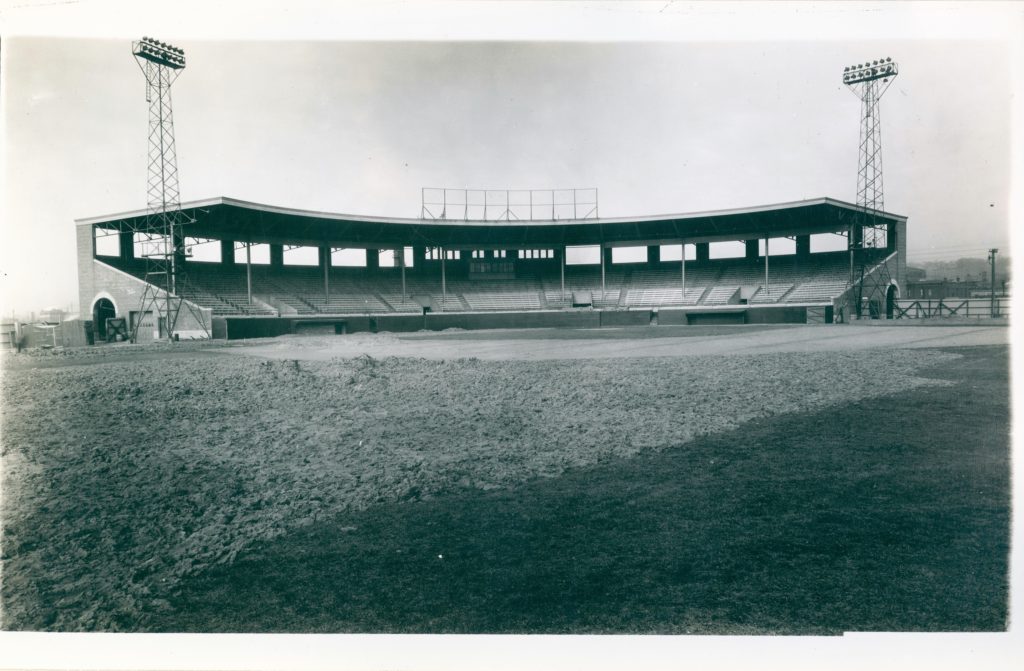 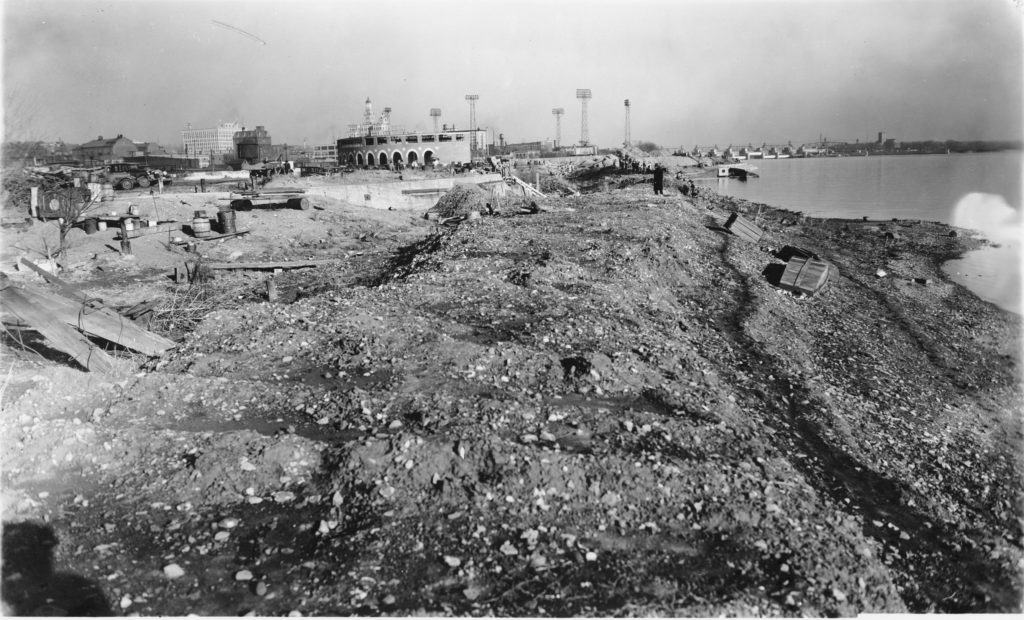 Expansions over the years added more seating to the stadium and modernized existing features. The name of the structure was also changed over time. In 1971, it became known as the John O’Donnell Stadium, and in 2007, the Modern Woodmen Park.

What may you expect to find at the ballpark in 2017? Grandstand, bleacher, or berm seating, a children’s area, an enormous Ferris wheel, fabulous ballpark food, an amazing river view, and, of course, outstanding baseball.

87 years ago, the Levee Commission dreamed big on baseball and Davenport. We hope you stop by this summer to see the amazing results!

*The Quad Cities River Bandits are a Class A minor league baseball team affiliated with the Houston Astros.