Walking Matches, also known as Pedestrian Matches, became a fad during the 1860s (starting about 1861, but interest only picked up in the United States after the Civil War) through the mid-1880s. Competitive walking was an international obsession with large competitions being held in major cities across Europe. Thousands of onlookers in larger cities paid to watch walkers compete in one of two ways:  a set number of miles in the shortest time or the longest distance in a set amount of time.

Davenport, and Scott County, quickly took up the Walking Match fad. A notice in the Davenport Daily Gazette, from May 5, 1868 proclaimed a Walking Match would be held on May 9th at the Scott County Fairgrounds with the distance set at 10 miles. (Pg. 4) Who won, you ask? As the match was postponed due to rain, we aren’t sure who the winner turned out to be- or if the match was held at all. 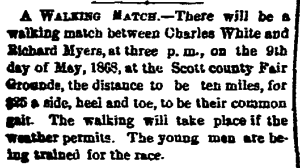 By 1876, the Davenport Daily Gazette advertised on the front page on November 4, 1876 that the German Theatre in Davenport would be the site of a great walking match between John J. Geraghty of St. Louis and John Oddy of Philadelphia. The men were competing in a 14-mile walking race. 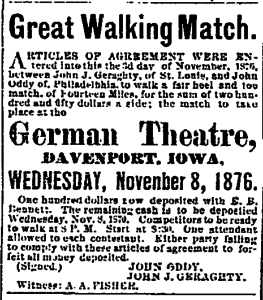 Mr. Geraghty and Mr. Oddy were most likely professionals on the Walking Match circuit and traveled from city to city competing. Most professional winners took home money put up by the sponsors and also received part of the gate receipts.

Amateur competitions also abounded in Davenport and other local cities. The Davenport Daily Gazette posted on March 25, 1879 that an amateur walking match was to be held at the German Theatre, starting at midnight the following night, with John Bowlsby, of Tipton, Iowa, and William B. Logan and C. E. Muhl, both of Davenport. (Pg. 4)

According to the follow up story on March 27, 1879, a professional walker, Prof. E. E. Miller, walked with the three amateurs:  Mr. Bowlsby, Mr. Logan, and Mr. Muhl. The three amateur competitors vied for a silver hunting watch, while Prof. Miller earned a portion of the ticket sales if he completed his agreed upon 100 miles in 22 hours. At midnight on March 27th  300 hundred spectators watched the start of the race. (Pg. 4)

Great detail in the news article described Prof. Miller: he was 23 years old, about 5’10” tall, and 150 pounds. He wore a stripped woolen shirt, blue knee breeches, stockings, and light shoes. It was noted he wore no hat.

The length of the sawdust covered indoor track was 176 feet, and one mile equaled 30 times around. The competition continued until 10:00 p.m. the following night. The Davenport Daily Gazette on March 28, 1879 reported that, during the event, lively music was played as attendance grew smaller in the afternoon but picked up again at night.

As for the amateurs, Mr. Bowlsby walked from midnight until 6:30 p.m, when he left the race. He walked the entire time with only one 15-minute rest and completed 76 miles and two laps. Mr. Muhl retired about 6:15 p.m. having achieved 74 miles. Mr. Logan completed his 50th mile – and the competition- at about 1:30 p.m.. He retired from the event and did not return. Consequently, Mr. Bowlsby received the silver hunting watch in the amateur division.

After the conclusion of the race, Prof. Miller challenged Madame DuPree, a professional Pedestrienne as the women were called, to a race. She later accepted and the two took part in a four day event held in Rock Island, Illinois in late April 1879. (Pg. 4)

Walking Matches continued into the early 1880s in Davenport and surrounding areas. Slowly, as the international crowd drifted away from the sport, local interest followed suit. But once upon a time, individuals could gain local fame simply by walking – and walking some more.