75 Years Ago Today: The Attack on Pearl Harbor

Sunday, December 7th, 1941 was a cold morning in Davenport. The morning newspaper was focused on the tense talks between the United States and Japan.

No one knew that life was going to change dramatically at 7:53 a.m. Hawaiian Time. Later, the entire country gathered around radios, trying to hear news of Japan’s attack on the military base of Pearl Harbor, located on the island of Oahu, Hawaii. The news grew steadily worse as the attack on Pearl Harbor unfolded. 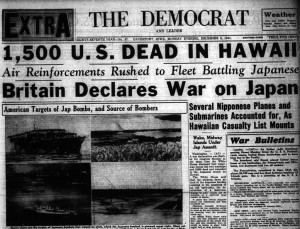 In an era without the internet, cell phones, and long distance lines, the families who knew their loved ones were serving or working in Hawaii or the Philippines could only wait and worry. Local newspapers printed the names of Scott County men known to be in service in the Pacific area.

The Rogers family of Davenport was an exception. On December 9th they learned that their son, Dean, was safe. An employee of Pan American Airways, he had been on Wake Island as the attack started. Pan American directed an airplane flying from the Philippines to the Island before continuing on to the United States. Dean and other airport personnel quickly boarded the plane upon its arrival. The pilot managed to successfully evade Japanese airplanes firing at them and safely arrive in the United States. (Davenport Daily Times, December 9, 1941. Pg. 8.)

Local newspapers printed pictures of those unaccounted for along with family information. Fortunately for his family, John B. Lakers, another local man, survived the attack on the U.S.S. Oklahoma and went on to serve in the U.S. Navy through December 1945 before being honorably discharged.

It wasn’t until about December 16th that newspapers began to hear reports from families; the United States government would not release the names of casualties or wounded to newspapers. However, families were allowed to update the news media when they heard their family members’ status.

In the confusing days following the attack, families of many sailors and soldiers received incorrect information from the government. Several local families were informed that their family member had died in the attack, only to later receive notice they had survived. Sadly, a few families learned those they though had survived did not.

In the days after Pearl Harbor, there was a rush of local men to enlist. While not all were accepted, a large number were. They soon went to fight a long war in Europe and the Pacific. 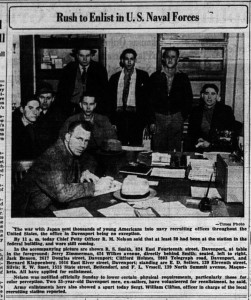 Everyone in Scott County, Iowa, and the United States as a whole, would soon face great loss and sacrifice.

Bad Behavior has blocked 594 access attempts in the last 7 days.