To Catch a Summer Breeze: The Upper Lagoon at Vander Veer Park

As an antidote to the heat and humidity of August, we share this photograph from our collection that we hope will evoke a cool and tranquil experience of the outdoors: 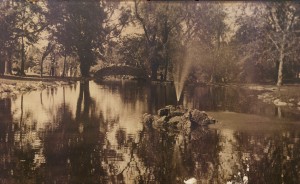 This photograph of the Upper Lagoon in  Vander Veer Botanical Park was taken in about 1915.  A stream connected it to the to the Lower Lagoon, the entire body of water running along the east side of the park. The Lower Lagoon still exists today at the park’s northern entrance.

While the original sepia-toned photograph is beautiful, we found it hard to see many of the finer details of features such as the stone bridge. For a clearer view, staff enhanced the photograph shown below by replacing the sepia tones with black-and-white coloring. Please click on the image for a larger view. 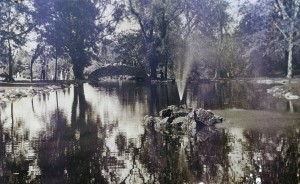 Color altered view of the above photograph to enhance details.

Purchased by the City of Davenport in 1885, the former fairground and horse track was slowly developed by the Parks Department, with its first grand design created in 1890.

All that remains of the Upper Lagoon is the arch of the stone bridge, still a draw for all visitors.

Next time you cross the bridge at Vander Veer Park, close your eyes to feel the cool breezes and hear the sound of trickling water from summer days past.

Bad Behavior has blocked 793 access attempts in the last 7 days.