As the heat of summer continues to warm most us to unpleasant levels; we decided to take a look back on ways Davenporters have kept cool in the past. We were excited to come across this advertisement for Riepe & Pratt’s Bathing House and Swimming School from July 27, 1862. 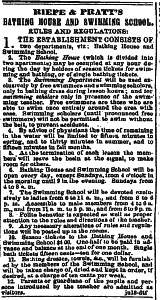 We were able to find that the school was owned and operated by Mr. William Riepe and Mr. William H. Pratt. They originally petitioned the City of Davenport to open the swimming school at the foot of Ripley Street where it meets the Mississippi River in June of 1861.

The gentlemen needed to get approval for their business from Davenport City Council due to a City ordinance that was passed on June 24, 1843 stating that no one was allowed to go into the river to bathe in front of the city from one-half hour before sunrise until one-half hour after sunset when bathing was then allowed, apparently through the night. A five dollar fine would be assessed for each offense for anyone breaking the ordinance.

The site selected for the bathing house and swimming school at the foot of Ripley Street would most definitely fall under this ordinance.

The two men filed a petition that was read at the June 5, 1861 Davenport City Council meeting to allow them a place for bathing in the river near Ripley Street. The motion was granted and the swim school began soon after.

A quick search of newspapers indicates that Mr. Pratt did not stay with the business for long, but Mr. Reipe maintained it every summer through the late 1860s.*

A few interesting items we noted in the July 27, 1862 advertisement includes the separate bathing times for women and men and the length of swimming time allowed based on physician recommendations.

One can only imagine how interesting it would have been to have been a patron of the swim school with the numerous boats loading and unloading both passengers and freight not far from the swimming area.

We hope that it at least provided a somewhat cool respite during those hot summer days.

Bad Behavior has blocked 585 access attempts in the last 7 days.