Davenport and the Democratic “Reform Caucuses” of 1972

It seems you can’t swing a dead cat in Davenport prior to the start of the presidential primary season without hitting a hopeful come to drum up support among voters. Candidate visits, with their attendant media coverage, are such a common occurrence that here in Special Collections we do not even include them when saving newspaper articles about important local events.

It was not always the case, however, that candidates regularly appeared in places such the River Center, LeClaire Park, the Mississippi Valley Fairgrounds — or even came to the state at all while campaigning for president. Up until 1972, Iowa’s system of caucusing to choose delegates for the national nominating conventions (in place since statehood in 1846) fell somewhere in the dull middle of the primary season. First-in-the-Nation status had not yet been conferred.

So what changed, and how did it play out here in Davenport and Scott County?

Following the the turmoil at the 1968 Democratic National Convention in Chicago, the national party created new rules to provide for better representation of the poor, minorities, women, and young voters among delegates to the national convention. For Iowa Democrats, adopting these rules meant that the long process of caucusing for county, district, and state delegates had to begin early in the election year. The first Democratic Party caucuses of 1972 were held in Iowa at 8:00pm on Monday evening, January 24th.

In Davenport on that day a wintry storm was expected. An editorial in the Times-Democrat made use of the snow metaphor to describe Iowa’s new role. The “first flurry of presidential politicking” would no longer be seen by New Hampshire primary voters, for “now the snowshoe is on the other foot. Iowans will have to break the trail.”

The editorial was skeptical that the “reform caucuses” would be a true “indication of grass-roots thinking” about presidential preference. Rather, they could provide “clues to the depth of the candidates’ organizational spadework.” According to an article by John McCormick, Senator George McGovern’s campaign showed signs of such disciplined digging in Scott County, enough to seriously challenge front-runner Senator Edmund Muskie in the area’s 57 Democratic precinct caucuses.

This was indeed the case, despite the forecast. The headline in the Times-Democrat on Tuesday,  January 25th read: “McGovern Strong In Scott Caucuses;” his backers received 81 delegate seats to Muskie’s 82. The McGovern for President forces were successful in Davenport: in addition to receiving a personal endorsement from Mayor Kathy Kirschbaum, the Senator from South Dakota won the majority of delegates from several precincts. Nationwide support for McGovern among the country’s youth was affirmed locally, including the election of 18-year-old St. Ambrose student Tom (Thom) Hart as Democratic committeeman for Ward 4, Precinct 4 (Hart remained active in politics, serving as mayor of Davenport*1986-1991; now Chair of the Scott County Democratic Party). The newspaper also reported that “two 17-year-old youths [favoring McGovern] who will observe their 18th birthdays before election day were elected alternate delegates to the county convention in Ward 8, Precinct 3,” and the McGovern backers expected to “take over” in Ward 3, Precinct 2, “where large numbers of Marycrest College students live,” in fact did so. 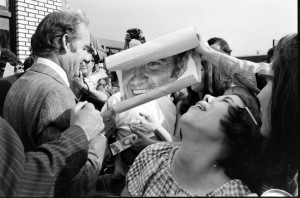 Credit for McGovern’s strong showing is widely attributed to the strategy put in place by his campaign manager, Gary Hart. The idea was to focus attention on the caucus states in the primaries, Iowa being the first. Early organization in Iowa by Jimmy Carter’s campaign four years later similarly resulted in a heightened national profile for the Democratic hopeful. 1976 was also the year the Iowa Republicans began to caucus at the same time as the Democrats: First in the Nation.

Do you remember the 1972 Democratic caucuses here in Scott County? Let us know!

*The Special Collections Center holds papers from both Thom Hart and Kathy Kirschbaum’s time as mayor of Davenport.

2 Responses to Davenport and the Democratic “Reform Caucuses” of 1972

Bad Behavior has blocked 835 access attempts in the last 7 days.