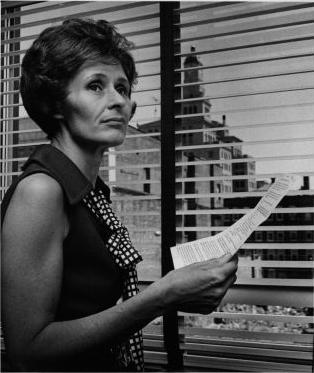 Kathryn Kirschbaum was born August 30, 1931, in Pittsburgh, Pennsylvania to Frank and Esther (Kiplinger) Goll. She graduated from Denison College in Grandville, Ohio, in 1953 with a degree in “Citizenship”. She was First Lieutenant in the Army Medical Corps at Ft. Sam Houston in San Antonio, Texas and she worked as a Registered Occupational Therapist in Denver and Ft. Belvoir, Virginia; where she specialized in Psychiatry and Tuberculosis. While in the military, she met Ray Kirschbaum, and the couple married on April 5, 1955 in New Kensington, Pennsylvania. They moved to Davenport in 1958 and had two sons, Mike and Steve. They lived on 2513 Wilkes Avenue and 2211 Marquette Street. Ray worked as a mechanical engineer, the head of the metal-cutting research laboratory at the Rock Island Arsenal. They divorced on July 9, 1974 in Scott County.

Mrs. Kirschbaum got her start in politics by becoming Legislative Chairman of the League of Women Voters. In 1967, she ran for and was elected 8th Ward Alderman and two years later, she was elected Alderman at Large.

Kathy often took her kids with her when investigating problems as an alderman, and she thought it was a good education for them.  Her sons helped distribute campaign literature and went with her when she did civic work. She saw her political involvement as enrichment to her family, and didn’t see it as a threat to their home life. As she said, her kids “still have their rightful expectations of me as a mother”. (Des Moines Register: 14Nov1971, p. 1)

She ran for mayor in 1971, campaigning as the ‘reform candidate’, her platform including installing a City Administrator/Manager, housing for the elderly and needy families, and revitalizing the Downtown.  In the November election, she defeated Bill Fennelly by 550 votes, becoming the first woman mayor of Davenport. With a population of 98,464, Davenport was the second biggest municipality with a woman mayor at the time (Patience Latting was mayor of Oklahoma City, pop. 367,856).

Mrs. Kirschbaum believed that the reason she was elected was not because she was a woman, but because she was a Democrat.   Davenport was the only city in Iowa to have partisan elections at that time, and according to her, the way the council-mayor system of government worked was “built for divisiveness” (Quad-City Times: 10Jun1975, p. 3).

She worked on changing the way the city runs, insisting on hiring an administrative officer trained in municipal finance and operations, adding a personnel director, and she favored appointment of professionals as city treasurer and clerk. She believed Davenport needed an administrator/Ombudsman to better serve the people of the city, though it wasn’t until 1977 that the City of Davenport passed a resolution to create the office of City Administrator.

She was an outspoken advocate for peace. In March of 1971, she went to Paris for the Citizens Conference on Ending the War in Indo-China. She campaigned for the McGovern-Shriver ticket in 1972, and people flocked to watch her speak. One woman in Galesburg said: “I’m glad I came. I’m not a Democrat but it’s nice to see a woman make it in politics. I’d like to talk to her, but what do you say? What do you call her? Mrs. Mayor?” (Galesburg Register-Mail: 31Oct1972, p. 10)

Kathy felt that Politics were ideally suited for women. “Women are free the way that men are not free, with the pressures of their business lives and burden of supporting a family…Women are free in situations such as these, and can act independently from the view of what is best for all concerned.”  (Des Moines Register: 4Nov1971, p. 1) “A number of people told me of men who said they wouldn’t vote for me solely because I’m a woman.” She was featured in an NBC News TV special about the changing relationship between women and men that aired on January 9, 1975.

Kathy Kirschbaum’s fight for women’s rights wasn’t limited to the political arena:  In 1973, she appealed to the Iowa Civil Rights Commission after being turned down for a credit card because her husband did not sign the application. The argument at the time was that a single man making $800 a year was better able to repay a loan than a married woman with the same pay, so it was ok to discriminate based on marital status.  Eventually, Mayor Kirschbaum won her point—and her card.

Kathy was an avid cyclist and cycled through Europe on a couple of occasions.  Kathy also pushed hard for a designated bike route on city streets, and the first leg of the City’s bike path was constructed during her time in office.   In 2004, the city dedicated a rest stop in her honor on the Duck Creek Recreational Trail, east of the intersection of Hickory Grove and Hillandale roads.

She lost the Democratic Primary to Dallas George in November of 1975.  After leaving office, she worked as Personnel Manager at First Federal Savings and Loan Association in Davenport. She was in the boards of the local American Civil Liberties Union, Quad City Arts and Vera French Community Mental Health Center. She retired to Davenport’s Ridgecrest Village, where she died on April 14, 2005 after a long illness.