Marion G. Crandell was born in Cedar Rapids, Iowa, on April 25, 1872.  She went to school in Cedar Rapids and Omaha, and attended the Sorbonne University in Paris, before residing with her brother for a short time in Alameda, California.

Our available resources don’t tell us what brought her to Davenport, Iowa.  What we do know is that she worked for a time as a French teacher at St. Katherine’s School.  And that, just before her 46th birthday, she went to war.

When America declared war on Germany in 1917, Marion Crandell, believing that her language skills would be useful in besieged France, resigned her position at St. Katherine’s and went into active service.  The School promised to keep her position open until she returned.

As women were certainly not allowed to participate in combat,  Miss Crandell joined the United States Christian Commission of the Y.M.C.A., which at the time was the primary organization in charge of overseas support services* for the Entente and allied troops.

Miss Crandell arrived in France on February 15, 1918, and set to work in the canteen of what was called Le Foyer de Soldat (or “Soldiers’ Fireside”)  a place for soldiers to rest and have a good meal, read books, and perhaps forget about the war for a few precious moments.

On March 27, 1918, Miss Crandell was working in such a Foyer in St. Menehould, near the front line.  German artillery began a bombardment of the town, and a shell destroyed the building in which Miss Crandell had taken shelter.

Marion G. Crandell became the first American woman in active service killed in World War I.  She was buried in the hospital cemetery in St. Menehould, though after the War, her remains were moved to the American Cemetery at Meuse Argonne.

In 1923, St. Katherine’s bought the nearby McCandless property as a memorial, opening the house as a separate faculty residence, “an object dear to the heart of Miss Crandell during her stay at the school.”  On November 11, 1925, a marker commemorating Miss Crandell’s sacrifice was placed at the foot of the Government Bridge by Colonel D. M. King, then Commandant of the Rock Island Arsenal.   Another, slightly more accessible memorial was later placed in front of the administration building at the Annie Wittenmyer Home (2800 Eastern Avenue). 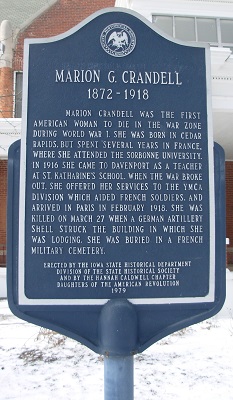 *This may seem strange to those of us who are used to thinking about the Y.M.C.A. as a place to swim or play basketball, and the Red Cross as the go-to organization for overseas support.  But the Y.M.C.A. had already been doing their part to assist and aid soldiers since the Civil War.  The Red Cross, which was chartered in 1900, did not experience its phenomenal growth as an organization until 1918, at which time it started developing the many service programs for which it is so well known today.